Transaction And Interests Behind „The White House”

At the beginning of 2017, a Cypriot offshore has acquired “The White House”, a commanding residential building in a luxury district of the Moldovan capital Chișinău. During the transaction for this property, which cost the buyer 130 million lei, the firm was represented by Iurie Luncașu, a man from the inner circle of oligarch Vladimir Plahotniuc, leader of the ruling Moldovan Democratic Party. This deal preceded two more real estate operations with assets owned by ASITO, a domestic insurance company. ASITO shares had been in the midst of a secret agreement between Mr. Plahotniuc and his foe Veaceslav Platon, a controversial businessman who the oligarch ultimately jailed.

The villa sized more than 2,000 square meters is located in the Telecenter District of the capital, in an area where many ambassadors accredited to Moldova reside. Hidden behind a tall stone fence, bypassers would barely see its roof. Neighbors call it “The White House”, for the white façade with classical Greek columns and close resembling with the official residence of US Presidents. The villa was sold together with another building across the fence. The latter is sized over 500 square meters and is designed for sport activities, including a pool covering about 200 square meters. Details, HERE

„White House” – a secondary transaction
Construction of the palatial villa on a field sized half a hectare was completed in 2009. Official cadastral reports show that the building hosts six apartments, each between 140 and 190 square meters, and a basement of almost 700 square meters for a leisure room and a gym. Details, HERE

The first owner of this building was a firm called Medias Health Service SA. It is part of a company group which is controlled by businessman Vladimir Russu (Details, HERE and HERE), the one who four years ago was the source of a scandal around planned construction of a necropolis in front of the Kentford office building. In 2010, the villa’s new owners are Vladimir Russu and Nina Ladîghina, a 75-year-old woman.

Russu and Ladîghina are business partners and in early 2017 founded a joint limited liability called Business Agreement SRL. Instead of cash, the two get their shares in the “White House” into the new firm’s statutory capital, which was valued at 130 million lei. His share is 61.64% and hers is 38.36%.

Vladimir Russu never replied our calls. One month ago though, in response to our request related the ownership of Business Agreement SRL and the villa, he said: “You may check with the Cadastral Database or elsewhere. It’s all written there.”

Vladimir Russu (in the center) at the Moldova-Monaco Business Forum, May 4, 2017 // Photo credit: Association of Businessmen from Moldova via Facebook

Investar Investments Ltd. was represented in the takeover of Business Agreement SRL and its 2,000-square-meter villa by Moldovan businessman Iurie Luncaşu, via power of attorney. Mr. Luncaşu is associated in four Moldova-registered companies including Acvilin-Grup, which around one billion lei in annual sales. In 2012 Luncașu was spotted as a travel pal of Vladimir Plahotniuc in France.

We’ve been unsuccessful in getting to discuss directly with Iurie Luncașu. His partner in all four firms, Oleg Bacalov, advised us to be patient. “He’s a busy man… Next week I am slated to have a meeting with him and I’m going to pass your request over to him,” Mr. Bacalov assured.

The sale agreement for Business Agreement SRL was authenticated by notary officer Olga Bondarciuc, whose office is in the Global Business Center (GBC), the business residence of Vladimir Plahotniuc. Details, HERE

Fashion Center and ASITO building as primary transaction
The agreement in which Mr. Russu acknowledged the sale of the luxurious villa to the Cypriot offshore company was preceded by another deal. Half a month earlier, on Valentine’s Day, Vladimir Russu and Nina Ladîghina walked into the GBC to sign another agreement, which was authenticated by the same notary officer, Olga Bondarciuc.

There, the business tandem legalized their ownership on two landmark buildings in the center of the capital: the Fashion Center (Centrul de Moda, which is actually an office building) and the former headquarters of the insurance company ASITO at 57/1 Bănulescu-Bodoni Street. Yet, they were not the direct beneficiaries – the deal was struck via Continental Business Invest SRL, a firm where Russu controlled 61.64% and Ladîghina controlled 38.36% – strikingly identically to their shares in Business Agreement. The deal was valued at around 134 million lei, a similar cost that appeared in the “White House” transaction two weeks later.

meters – from Capital Investments SRL, which was a daughter firm of a Cypriot offshore company. (Details, HERE) Two years ago, Capital Investments was reported in real estate operations with Moldovan trade union organizations, among them the sale of the Cultural Palace in the Râșcani District of the capital.

Fashion Center’s and ASITO’s timelines
Before falling into the hands of Russu and Ladîghina, the two buildings – Fashion Center and ASITO – had been seized by Capital Investments SRL in time-verified schemes. During three years before the events described above, ASITO building had been an issue of dispute in domestic courts of law and, along with the Fashion Center, seized via proxies and intermediary firms. 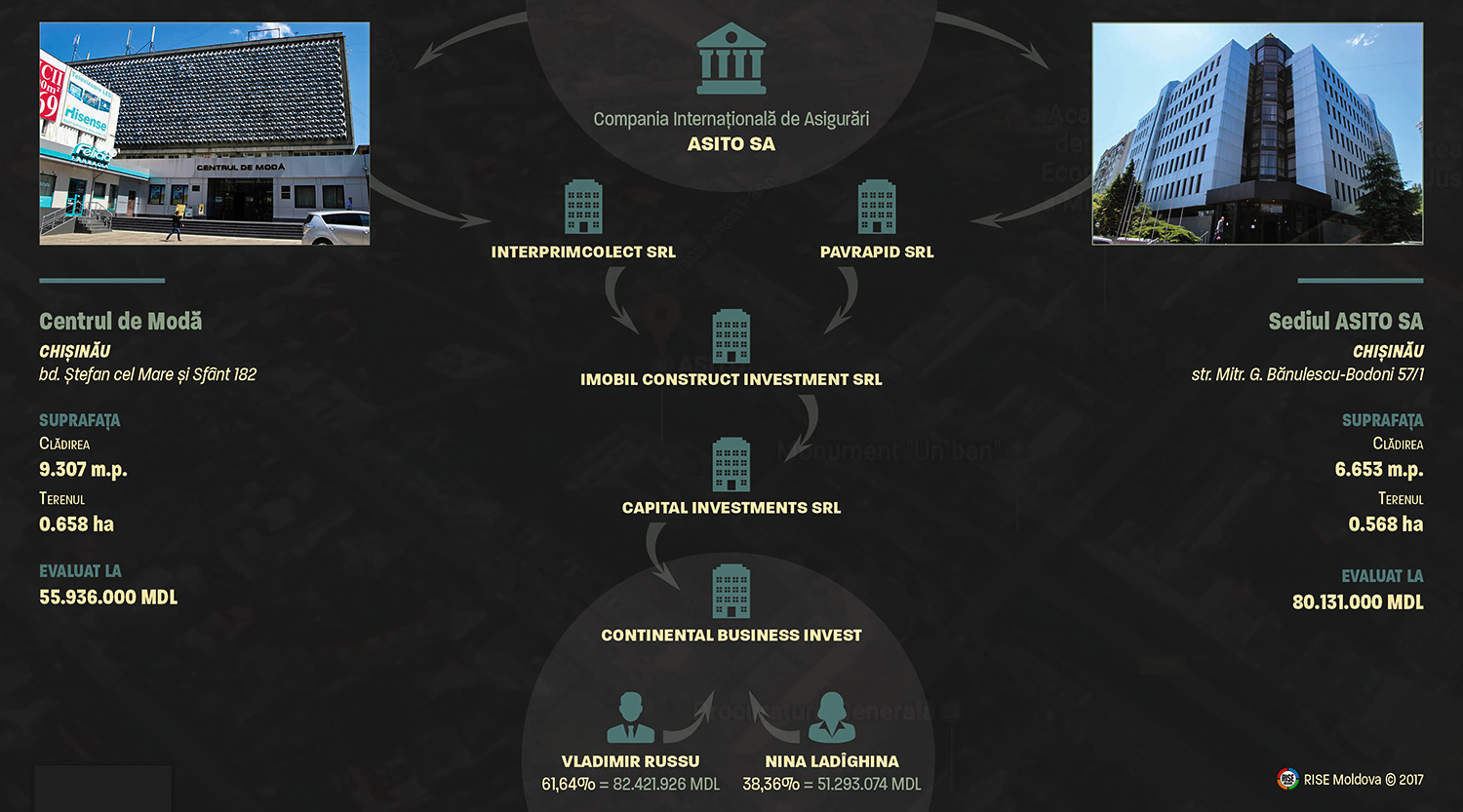 The Fashion Center is located in the main street of the Moldovan capital, nearby the Russian Federation’s Embassy. The building is sized more than 9,000 square meters and is valued at almost 56 million lei. (Details, HERE) In autumn 2014 it changes owner – Interprimcolect SRL, a company registered in Comrat, administrative center of the Gagauzian autonomy and controlled by a Ukrainian national. In February 2015, Imobil Construct Investment SRL took over as its new owner. The latter was controlled by Tudor Ciapoi a month before this transaction. Details, HERE

During the same period Imobil Construct Investment takes over the ASITO building – 6,600 square meters and 80 million lei including adjacent area. (Details, HERE) The move followed a January 2015 meeting of ASITO’s board in Kiev which was made up of Ukrainian nationals who decided to deposit the building as the statutory capital of Pavrapid SRL. The latter intended to sell the building to a UK company. “The purpose of this investment is to diversify the assets by alienating the building and raising money for bank deposits and state bonds,” the board argued.

ASITO soon obtained green light from the National Financial Market Commission for this transaction, in spite of the fact that the building had been seized since summer 2014. Surprisingly, on February 9, 2015, bailiff George Boțan decided to lift the arrest status on the building in Bănulescu-Bodoni Street and to apply it instead to other ASITO buildings. Details, HERE

Four months later, a court found that Mr. Boțan broke the law regarding his decision about the buildings in question, but the window opened was wide enough to allow the building in Bănulescu-Bodoni Street to end up in British offshore company Calmview Services Ltd. via the takeover of 99.99% of Pavrapid SRL.

At that moment, the firm was controlled by Ukrainian national Volodymyr Cherepanskyi. (Details, HERE) Shortly, he sells the limited Pavrapid – along with the ASITO headquarters – to a Moldovan national from the city of Dubăsari, Transnistria, who in turn sells the building to Ciapoi’s firm Imobil Construct Investment SRL.

With a grip on both buildings, in May 2015 Ciapoi sells them to Capital Investments SRL, again featuring Olga Bondarciuc as the notary officer who authenticated the sale agreement. In early 2017 Capital Investments founded Continental Business Invest SRL and enlists both the Fashion Center and the ASITO building in the statutory capital of its new firm – altogether valued at 133 million lei. One month later all three firms are taken by the Russu-Ladîghina tandem.

RISE Moldova requested information on this subject from Sergiu Șterbeț, administrator of Capital Investments SRL. He asked to have the questions emailed by has not replied so far. 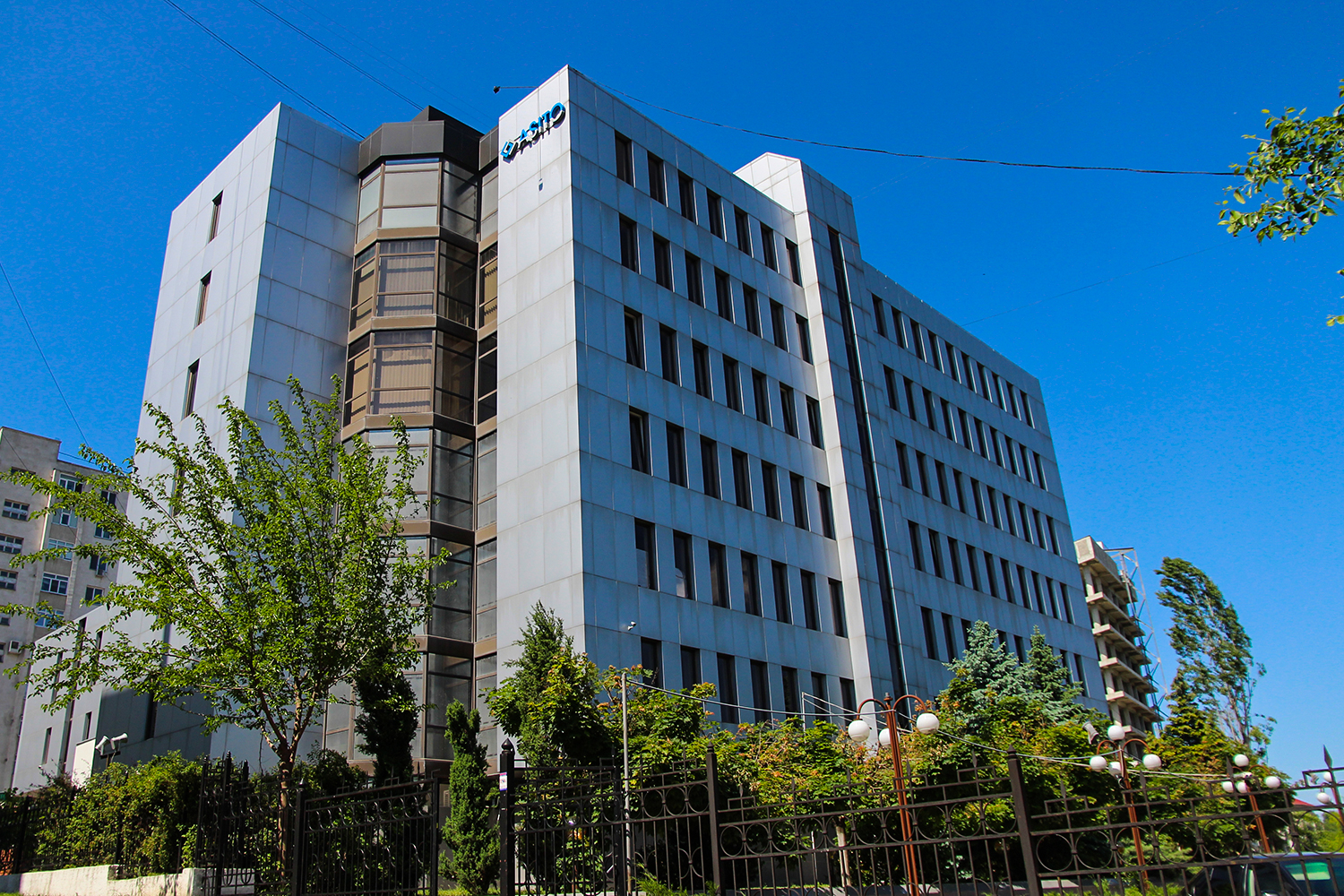 Secret Platon-Plahotniuc deal with ASITO shares
The estrangement of two ASITO properties took place in a period when the insurer was in a busy asset purging spree, selling many buildings as if acting as a conveyor belt. (Details, HERE) As a result of these transactions the control over the company was sliding into the hands of Veaceslav Platon, a controversial businessman and banker who recently was convicted to an 18-years prison term for fraud and money laundering.

In august 2016 Mr. Platon filed a complaint at the Department for Investigation of Organized Crime and Terrorism in Romania against Vladimir Plahotniuc. He claimed that he had bought assets in Moldova from Mr. Plahotniuc, via his brother-in-law Iuri Kontievski. Details, HERE

Mr. Platon included in his complaint a “secret deal” worth 5 million US dollars at the end of 2011, regarding the trading of 83% of ASITO shares by his UK offshore Windon & Flanders Ltd. According to him, the money was transferred on December 5, 2011, by Ronida Invest LLP, a UK limited partnership, to an account of Kelway Trading SA, a Panama offshore.

Vladimir Plahotniuc has dismissed the allegations of Veaceslav Platon. Mr. Plahotniuc said in a letter to RISE Moldova that he had lodged a complaint against Mr. Platon for “false confessions.” Details, HERE

But the papers which RISE Moldova has obtained show that exactly as Mr. Platon claims, Ronida Invest LLP and Kelway Trading SA did make a deal worth 5 million dollars. The money came from two other companies involved in the „The Russian Laundromat”. Before banking officials, the transfer was justified with a fake contract for sale-purchase of construction materials.

Months later, in spring 2012, Australian national Rachel Amy Erickson, who was formally the founder and administrator of Windon & Flanders LTD and therefore was in control of the 83% of ASITO share, was substituted by Alexander Starovoytov, a Russian national who worked for Mr. Platon. (Details, HERE) This move, as he explained, is part of his secret agreement with Mr. Plahotniuc.

At the end of the same year, Mr. Starovoytov sold 16% to Ourimon Venture Ltd. and 17% to Dorwan Management – two Cypriot offshore companies – but kept 50.1% for himself. (Details, HERE) The court that sentenced Veaceslav Platon to prison mentioned in its verdict, which yet can be appealed, that Platon’s representative still had been in control of an 83% stake in ASITO.