According to the Panama Papers, two Russian businessmen used an offshore company to borrow more than € 5 million for a winery they own in Chisinau. Documents compiled by the offshore services firm of Mossack Fonseca show the two set up a company in the British Virgin Islands. The point of such a transaction would be money laundering, according to an expert consulted by RISE Moldova. Connected to the alcohol market in the Russian Federation and the breakaway region of Transnistria, in recent years the Russians have moved several businesses to tax havens, including the Moldovan winery, Vismos. 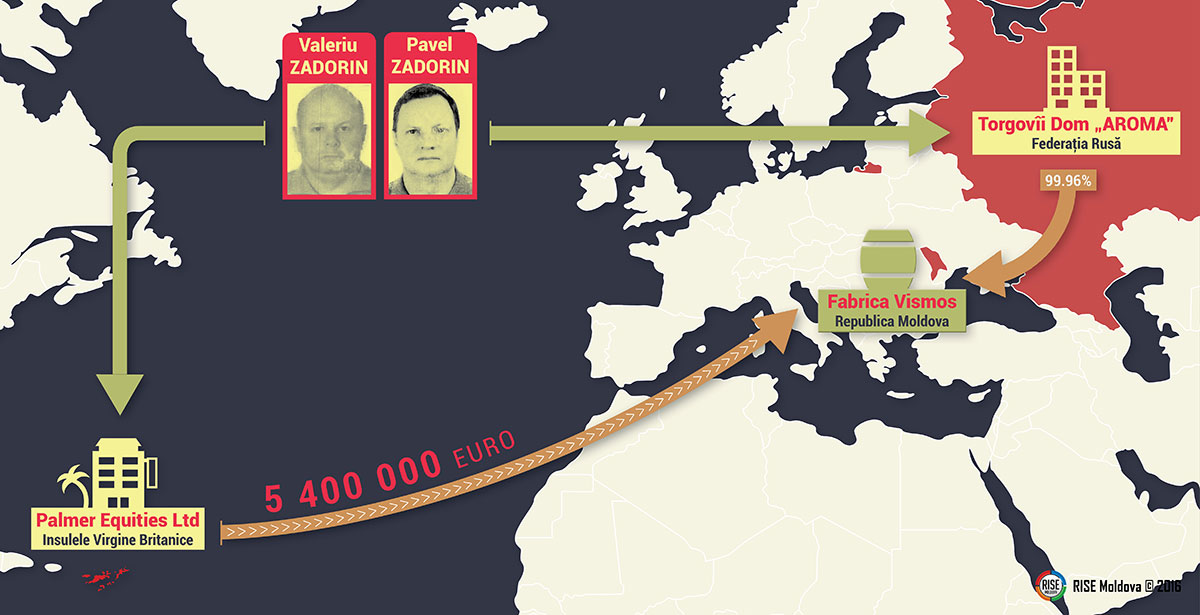 Russian investor
Vismos, a Chisinau winery that produces sparkling and varietal wines, was privatized in 2002 when the state sold 99.96 percent of Vismos to Aroma Trade House, a company from the Russian Federation, for US$ 1.4 million. Details, HERE

Aroma Trade House is a closed joint stock company that brings together companies involved in the alcohol trade. In 2015, Aroma joined Russia’s top 20 largest importers of alcohol and is among the leading distributors on the Russian market. Details, HERE and HERE

According to the Panama Papers, two Kyrgyz brothers are the real owners of Aroma Trade House, hidden behind a network of offshore companies. Pavel and Valeriy Zadorin do business primarily in the Russian Federation, appearing as shareholders or directors in dozens of companies active in the real estate or alcohol market.

The lender created by Mossack Fonseca
In 2005, three years after Vismos was privatized, it concluded a loan agreement with Palmer Equities Ltd., an offshore from the British Virgin Islands (BVI). In subsequent years, the Chisinau winery signed two similar agreements with the same company. The total amount borrowed from Palmer comes to € 5.4 million.

When RISE Moldova asked about the loans, Vladimir Zviaghin, the current director of Vismos, appeared to be irritated. “We took the loan, so what?” he said. “It’s strictly our business where we take our loans. You better take care of other issues: to praise the country, how good and beautiful it is, to attract tourists, but not to dig inside the wrong place. This issue is the business of the National Bank and the specialized agencies.”

Palmer Equities Ltd. was registered by the Mossack Fonseca law firm in 2002. In 2005, its ownership was equally split between two companies from Cyprus: Busson Ltd. and Serilnit Ltd.

#PanamaPapers Documents show that the Zadorin brothers are the actual owners of Busson Ltd. (Details, HERE), which holds 50 percent of Palmer Equities Ltd. The remaining shares of Palmer are owned by Serilnit, which in turn belongs to Grigorij Kail, a German citizen who lives in Hong Kong. Details, HERE and HERE

Shareholder on account of debt
In April of 2012, Vismos shareholders decided to start paying down the debt by issuing shares totaling 22 million lei (US$ 1.1 million) to Palmer Equities Ltd. A month later, the operation was registered by the National Commission of Financial Markets (NCFM) of Moldova, nearly doubling the share capital of the wine factory from 29 to 51 million lei (US$ 1.4-2.5 million).

With this transaction, the Zadorin brothers consolidated their control of Vismos. While the share of Aroma Trade House dropped to 56.76 percent, the offshore Palmer Equities got 43.21 percent of the shares, the remaining .03 percent being split in marginal shares amid six Moldovans. Details, HERE

Eugen Ghiletchi is an expert at the Institute for Policy and European Reform, and the former chief of the Stability and Monitoring of Activities to Prevent and Combat Money Laundering and Terrorist Financing unit within the NCFM. He told RISE Moldova: “This scheme shows that, most likely, the money comes from illegal activities, because there is no point (in obtaining) credit from abroad. Because it’s just the loan agreements, then their (goal) is not tax evasion through offshore, but trying to hide the origin of money. And if you say that they have activities in the CIS, probably somewhere they evade taxes and take (the money) out in offshore, then bring it back to Moldova and Russia and thus legalize these flows.”

Ina Sovetova, who holds a power of attorney to represent Palmer Equities, did say: I, as a lawyer of (Vismos) cannot discuss this without the consent of my superiors. This is not about money laundering, because the loan contracts were approved also by the National Bank. Why they took the money from, specifically, this offshore, I do not know, but the loan was motivated by the need of current assets. It was a very difficult situation, we took loans from the bank as well. Even today, due to the embargo imposed by Russia, it is not easy, but we survive.

Millions of euros, ‘personal savings’
Since 2014, under the law on prevention of money laundering and terrorist financing in the BVI, the Zadorin brothers were required to submit affidavits on the origin of the money invested in Palmer Equities. In front of Mossack Fonseca lawyers, the two stated that the money came from “personal savings.”

In the summer of 2015, the winery was reorganized from a joint stock venture into a limited company. A week later, the company’s director informed representatives of Palmer Equities of this fact and reaffirmed its contractual obligations on previous loans. The winery had an outstanding debt to Palmer of about € 4 million. Details, HERE

Meanwhile, the Zadorin brothers and their partner, Grigorij Kail, relocated their shares of Aroma Trade House offshore. Thus, in early 2015, Aroma Trade, which owns 56 percent of Vismos, was taken over by a Cypriot firm, and its ultimate connections go through another firm from BVI to the same Palmer Equities Ltd.

Once again, the Zadorin brothers declared that the money invested came from personal savings. Details, HERE

Suspicions of the Court of Accounts
When Aroma Trade bought Vismos, it promised to invest more than US$ 3 million by 2007. Records indicate that it met that commitment. In the same period, however, the winery concluded the first two loan agreements with Palmer Equities.

A report by the Court of Accounts in 2010 shows that although “Aroma Trade House made investments of its own funds,” at the same time it took out loans without notifying the authorities about the scope and terms of the loans, as required by the sale-purchase contract of Vismos. “In fact, in 17 cases of obtaining loans, the joint stock company in only two cases informed the seller within the deadlines,” the court’s auditors wrote. In other cases the company waited as much as a year before notification, the auditors said.

Transnistrian connections
Before they bought Vismos, the Zadorin brothers were active in the alcohol market from Transnistria. Aroma Trade, in the early years of the 2000s, was the exclusive distributor of Kvint wine and brandy products (made in Transnistria) in Russia.

Transnistria is a disputed territory of about 500,000 people on the eastern side of the Dniester River along Moldova’s border with Ukraine. Since a brief war with Moldova in 1992, it has operated as an unrecognized state with its own institutions, although it is officially still part of Moldova.

The relationship of the Zadorin brothers to the Transnistrian cognac factory was not limited to distribution. In 2002, they obtained 50 percent of Kvint-Market, a Transnistrian company 50 percent owned by the Kvint factory. Subsequently, the entire stake of Kvint-Market became the property of Aromatniy Mir JV, a Russian company also controlled by the Zadorin brothers through the closed joint stock company Forest-4 JV. Details, HERE

In 2006, Aromatniy Mir sold Kvint-Market to an offshore in the BVI: Billings Ltd., which was listed among the co-founders of Forest-4 JV. Conversations from Mossack Fonseca people published in #PanamaPapers show that Billings Ltd. was liquidated in 2008. Details, HERE

‘Zadorinka’ Vodka
The year 2006 was actually the end of business in Transnistria for the Zadorin brothers. In that year, the Kvint factory was privatized by Sheriff Ltd. Meanwhile, at the request of the Transnistrian Ministry of Economy, the court annulled the contract under which Aroma Trade House had obtained the exclusive right to distribute Kvint products in Russia.

Furthermore, at the request of Transnistrian officials, local judges annulled the transactions on the sale of Kvint-Market shares to the offshore and ordered the return of 50 percent of the shares to the Kvint factory.

A letter disclosed by #PanamaPapers shows that the Kvint-Market company from Tiraspol lent money to the same offshore from which Vismos had taken loans: Palmer Equities. In that document, dated March 2007, a BVI representative tells the director of Kvint-Market that „interest-free loan return is impossible at the moment.” Details, HERE

Today, the Zadorin brothers’ businesses in Transnistria are just a memory. The factory, however, still manufactures “Zadorinka” vodka, named for them.

According to Simion Leva, a member of the board of directors of Vismos: I believe that the vodka’s name is a success. It was invented long ago, in the (early) 2000s, when they (Zadorin brothers) still worked with Kvint. The people at the factory decided that since we are working with Zadorin, why not produce a vodka with the same name!?