Moldovan residents are being recruited for the Russian army group in the Transnistrian region without agreement from the Chisinau government. The recruitment is carried out via street ads and Telegram messages. RISE has dialed a phone number from the ad, with the reporter introducing himself as a jobless man from the city of Balti. The discussion covered the probability of being commissioned to the Ukrainian battlefield as well as the “benefits” of the Russian military service.

RISE Moldova has also learned what positions the new contract military get in the Russian army group in Moldova’s eastern enclave, what promises are used to lure locals, and what are the true conditions of the Russian military service that ads would not state. 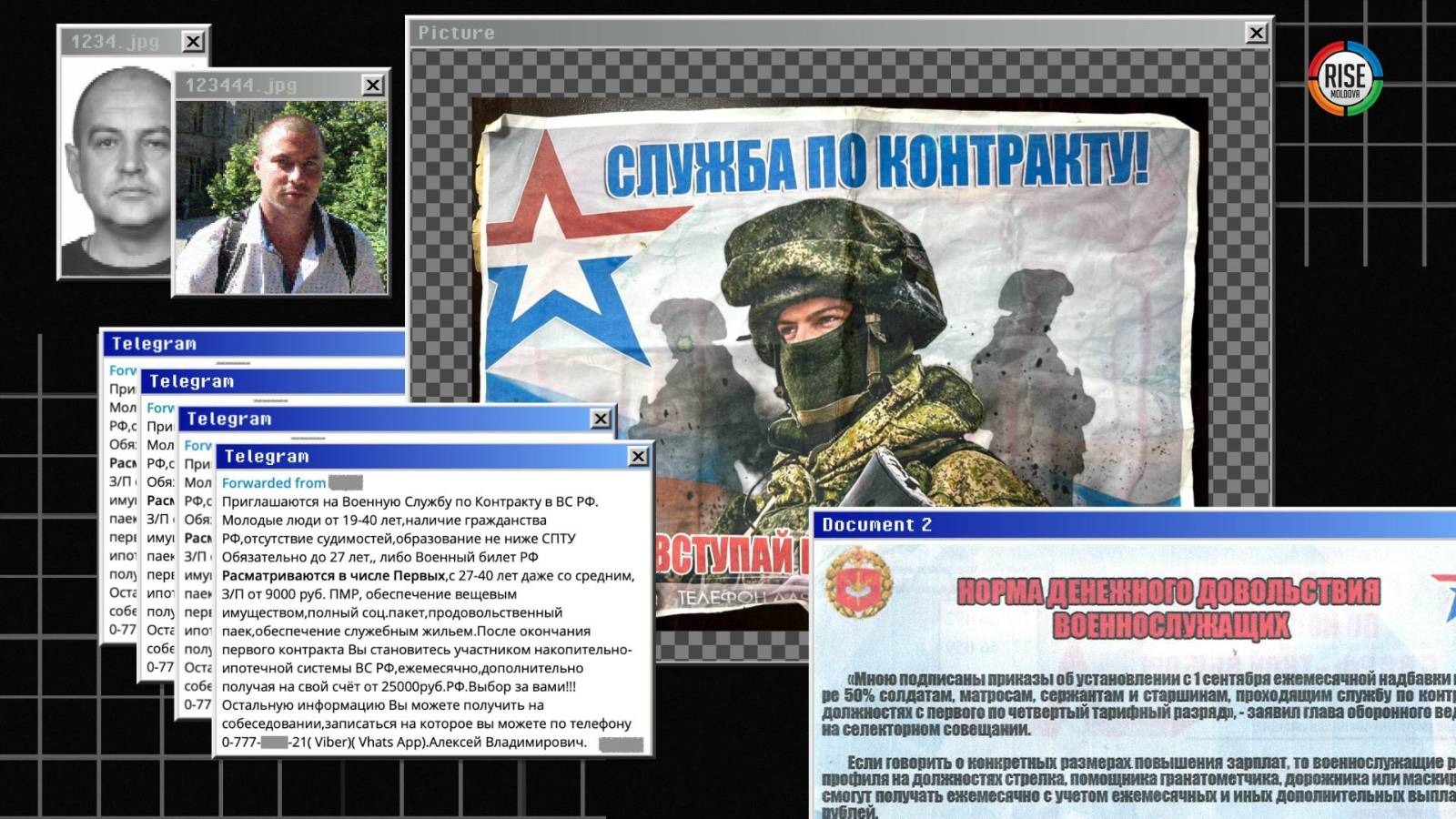 — What position could I get in the army? I am a civilian, not military …
— What do you mean? Do you really think it’s just your case? Do you believe that everyone is born with a rifle in his hands? If you want to learn, then you learn. It doesn’t matter that you are a civilian now! […] There are [in the army] positions for shooters, machine gunners. Various positions…

This is a fragment out of a half-an-hour long discussion in mid-July 2022 between a RISE reporter and a man handling the contract recruitment for the Russian army group in Transnistria, a Russia-backed unrecognized republic in eastern Moldova since the end of a 1992 war. 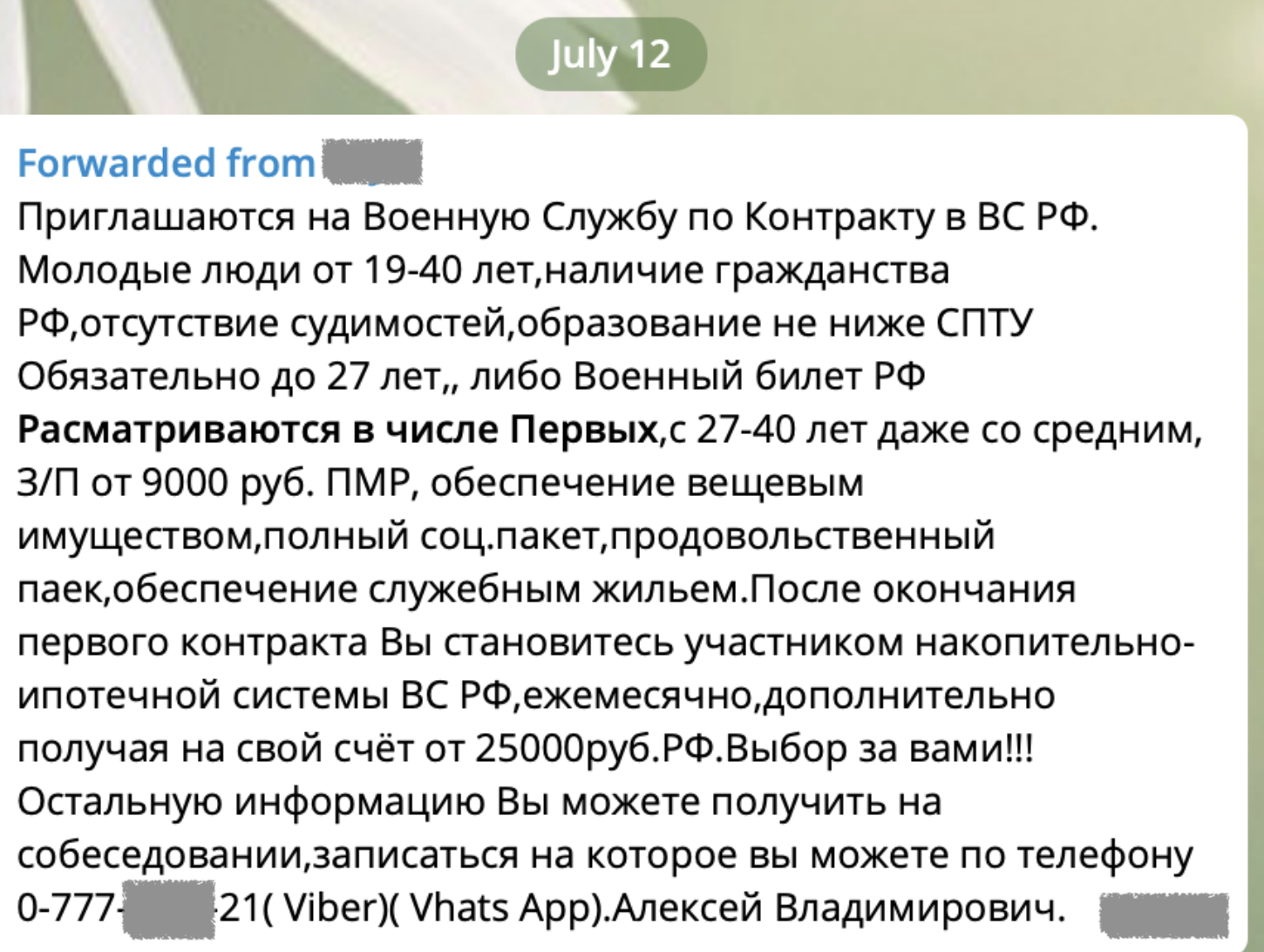 We came across his phone number in an online ad poster that was sent over by a reader. In July, the advertisement was shared among Transnistrian residents via the Telegram ad service. Another reader passed to RISE a similar printed poster, with another phone number. The reader said he spotted the poster in mid-June 2022, at a bus station in the city of Tiraspol.

The poster features a man in military uniform on a Russian flag background, and a call message: Military service on contract, join now! Ask for details at 0779***32.

COMRADES IN ARMS OF AGGRESSOR ARMY

The supposed recruiters are Sergey Dmitrjevich Klimov – „the holder” of the phone number from the poster, and Alexey Vladimirovich Storozhuk – his number is contained in the online ad that was shared via the Telegram app.

The Joint Strategic Command of the Western Military District is under the control of the Russian Defense Ministry. According to data released by Ukrainian security services, the regular units serving in the Western Military District have been participating in the Russian invasion in Ukraine. This means the recruiters in Transnistria are comrades in arms with the soldiers of the aggressor state who have been waging a brutal war in the neighboring country since February 2022.

MU 13962 – This code name can be found in various open sources such as media publications and Russian government portals; it stands for the Military Unit # 13962. It is also identified sometimes as GOTR or the Operative Group of Russian Troops in the Transnistrian region. Some estimates put the man force at around 1,500 troops.

Via this military contingent, Russia keeps control over the region, a ruling by the European Court of Human Rights states (Details HERE). „The “Transnistrian Moldovan Republic” has continued to exist and to resist the Moldovan and international efforts aimed at resolving the conflict and bringing democracy and the rule of law into this region thanks to the military, economic, and political support from Russia,” the Strasbourg-based court clarified in one of its decisions (Details HERE).

Four years ago, the United Nations General Assembly passed a resolution that calls on Russia to withdraw its troops from eastern Moldova “unconditionally and without delay.” The same resolution expresses the international community’s concerns over the continued stationing of GOTR and its weaponry on Moldovan territory.

GOTR employments from within Moldova has been condemned by the Ministry of Foreign Affairs and European Integration (MAEIE) in Chisinau.

MAEIE said in comments for RISE Moldova: The so-called Operative Group of Russian Troops has been stationing in the Transnistrian region without the agreement of the Moldovan authorities, violating thus the principle of international law. The illegal nature of GOTR’s presence in the Transnistrian region of our country has been a consequent stance of Chisinau. Or, in this context, the recruitment of locals into the military structures that exist illegally in Transnistria represents an infringement of the sovereignty, territorial integrity, and neutral status of Moldova. Details HERE

Such behavior also violates Russia’s obligation to ensure the neutrality of its troops, which is explicitly stated in an agreement regarding the principles of peaceful settlement of the Transnistrian conflict which the presidents of the Russian Federation and of the Republic of Moldova signed on 21 July 1992.

This stance is shared by the Reintegration Policy Bureau of Moldova. In a response to RISE, this institution said “the stance of the Chisinau authorities is clear, unequivocal, and unchanged, [and namely] that those forces (GOTR) must be evacuated unconditionally along with their weapons that have been stored in Moldova illegally and represents high risk factors for our security and environment.” Details HERE

On the other hand, Oleg Belyakov, the official representative of the Transnistrian administration in the Joint Control Commission, was quoted as saying in 2021 that “it is impossible to consider any matters regarding the activity of the peacekeeping forces, or GOTR, or even the peacekeeping mission as such, as long as the status of the Transnistrian Moldovan Republic and its security [guarantees] remained unclarified.”

We found the information about the supposed recruiters (including their real names and proof that they are part of the Russian army) by following the leads from the phone numbers in the ads.

1. Using a free application, we have established that the user of the Telegram channel was identified in other users’ agendas as Alexey Starozhuk (Старожук Алеша). Since the ad contained the recruiter’s surname and father’s name, we have obtained his full name. 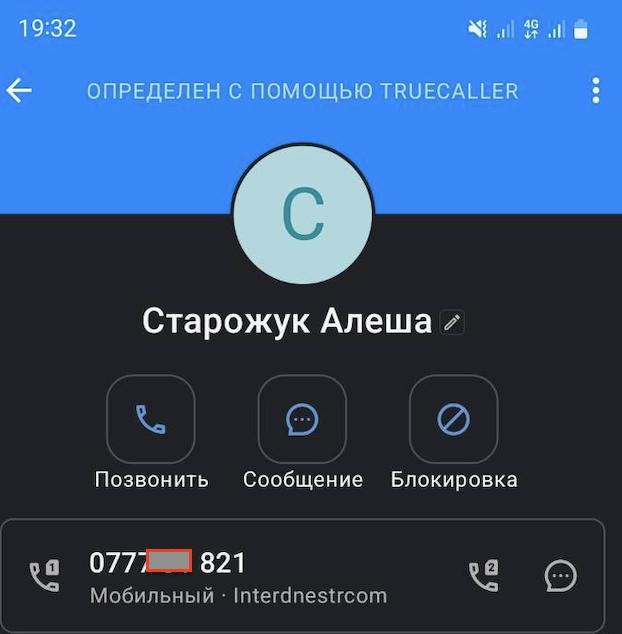 2. Browsing Transnistrian elector database, we found that there was just one person with that name, surname, and father’s name. This way, we have learned the birthdate and resident address of the supposed recruiter. Armed with these data (name, surname, father’s name, birthdate, residence), we continued our searches in official Russian directories.

3. Employing anonymous chat bots, we have succeeded to get information about his workplace and some flights.

4. Even more – our colleagues in Russia have helped us obtain an official extract from the Russian ID database RossPasport, which confirmed that he indeed lived in Tiraspol and gave us details about his family status. We also could see his face from a picture.

The same check-up procedure was employed to identify the second recruiter in Transnistria, Sergey Klimov, whose phone number was displayed in a printed poster at a bus station in Tiraspol.

So, who are the men from the ads seeking for Moldovan volunteers for the Russian army? 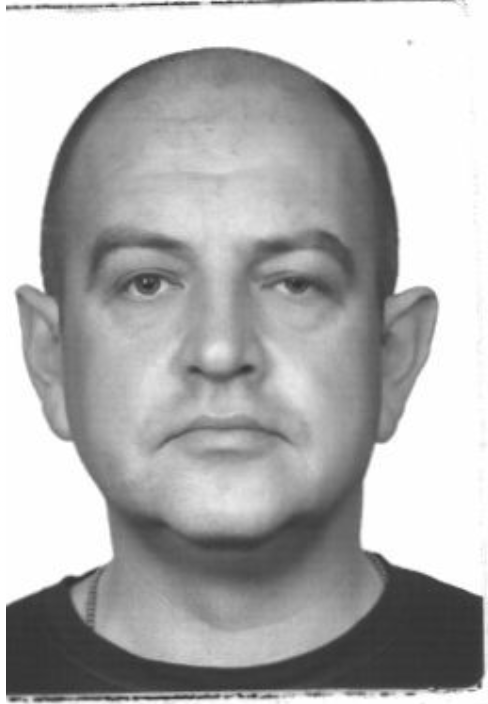 ALEXEY STOROZHUK, 45 years old, a Russian career military with GOTR. Official papers show that he was born and resided in Tiraspol, serves within GOTR, and his Russian passport was issued in the Russian city of Bryansk in January 2022.

The only picture of him from open sources we have found in his wife’s social media profile. The picture was posted in 2008, therefore we decided to publish the picture from RossPasport.

In mid-July, RISE called Alexey Storozhuk by phone, on the number in the above-mentioned advertisement, to ask him questions about the recruitment of volunteers.

Pretending to be a 30-year-old man from Balti, with no incomplete secondary education, a Russian citizen and no military experience, our reporter tried to obtain details about the offer.
Reporter: […] — What is the length of the contract service?
Alexey Storozhuk: — The first one is for three years.
R.: — Three years… Any extension available?
A. S.: — Yes. After having served the first contract, the man files some papers and starts receiving money in a bank account in Russia. The serviceman gets a separate account and money begins coming there for mortgage.
R.: — Yes, I saw that in your ad.
A. S.: — Well, for your understanding. We have three buddies from Siberia, Taganrog, Voronezh, who have been serving for 13-18 years. They are earning or have already earned as much as they would not care for a miserable pension or working until they turn 65 for a civilian retirement benefit.

Asked whether there is a probability of being deployed to battlefield in Ukraine, Storozhuk became evasive, branding the question “provocative”. He initially suggested employment as a porter or warehouseman for security concerns, sub then subtly mocked at our reporter: “With such an attitude, you’ll be running from yourself your whole life. I want to stay safe, I want to stay warm. And then the day comes when you realize that you have nothing, neither behind nor in front. Like that.”

In conclusion, Storozhuk explained that for enrollment in the Russian army in Transnistria the applicant needed a Russian military service book and a clear criminal record from the Russian state.

Russian military retire after a ten-year service and in such case, they qualify for a minimal pension, which amounts to 10,000 rubles (around 170 USD). 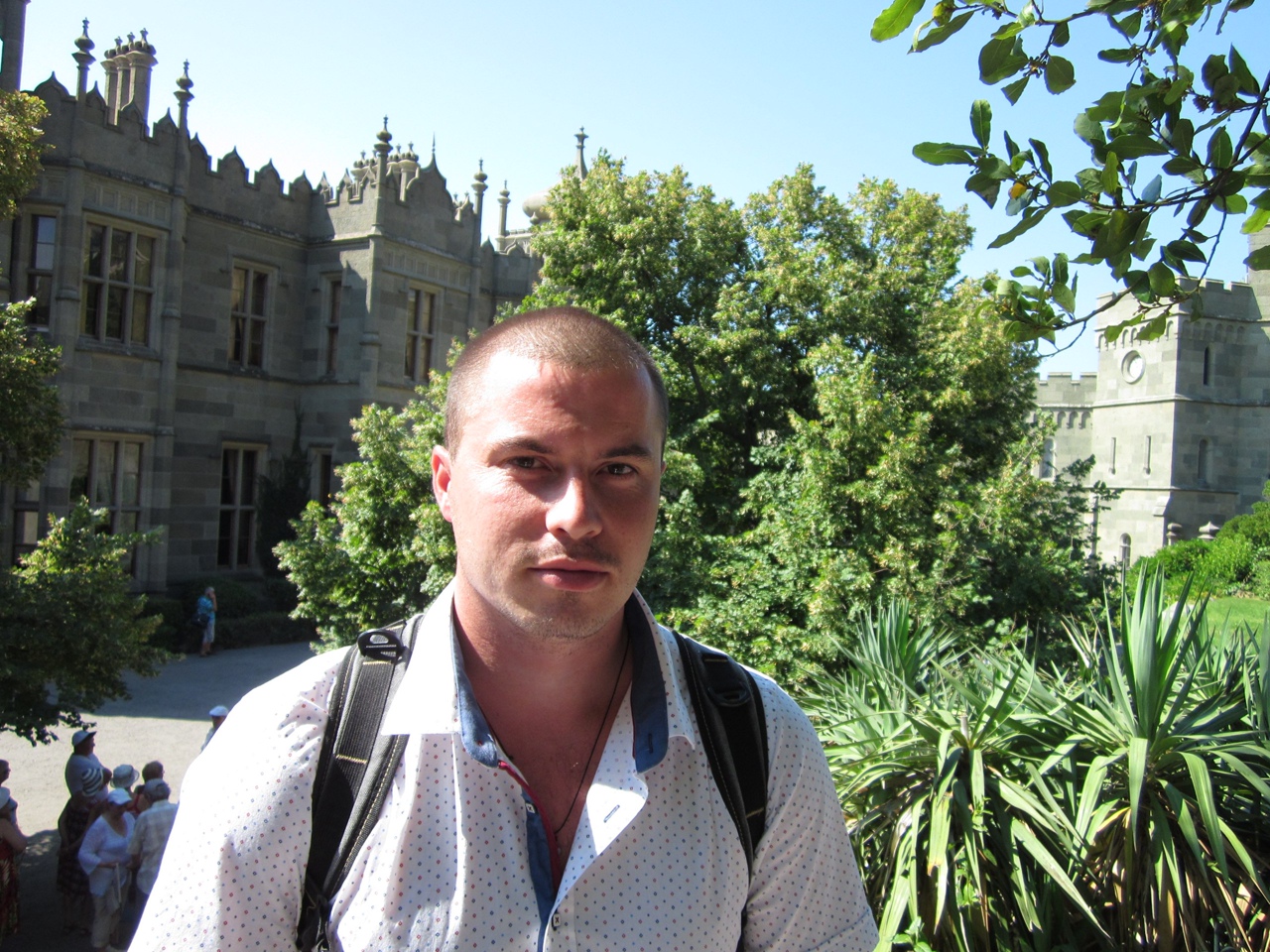 Sergey Klimov, in front of the Vorontsovsky Castle in Alupka, the Russia-annexed peninsula of Crimea.

A few weeks after this discussion, we called again Alexey Storozhuk, this time disclosing who we really are. We asked him to elaborate regarding the ad where his phone number appeared. Upon hearing his family name, the man paused for a few seconds and said: “Does that ad feature any family name?… The name you pronounced is not mine,” and he hanged up the phone.

Sergey Klimov published a selfie in his VKontakte social media profile, in February 2016, taken near the Vorontsovsky Castle in the town of Alupka, Crimea, when the peninsula had been already annexed by Russia.

PAY, CLOTHING, AND FOOD
A reader of RISE Moldova has passed to us an official brochure that advertises the benefits of the Russian military service in eastern Moldova. The source said the brochure had been left to him by a man who signed up for this service. 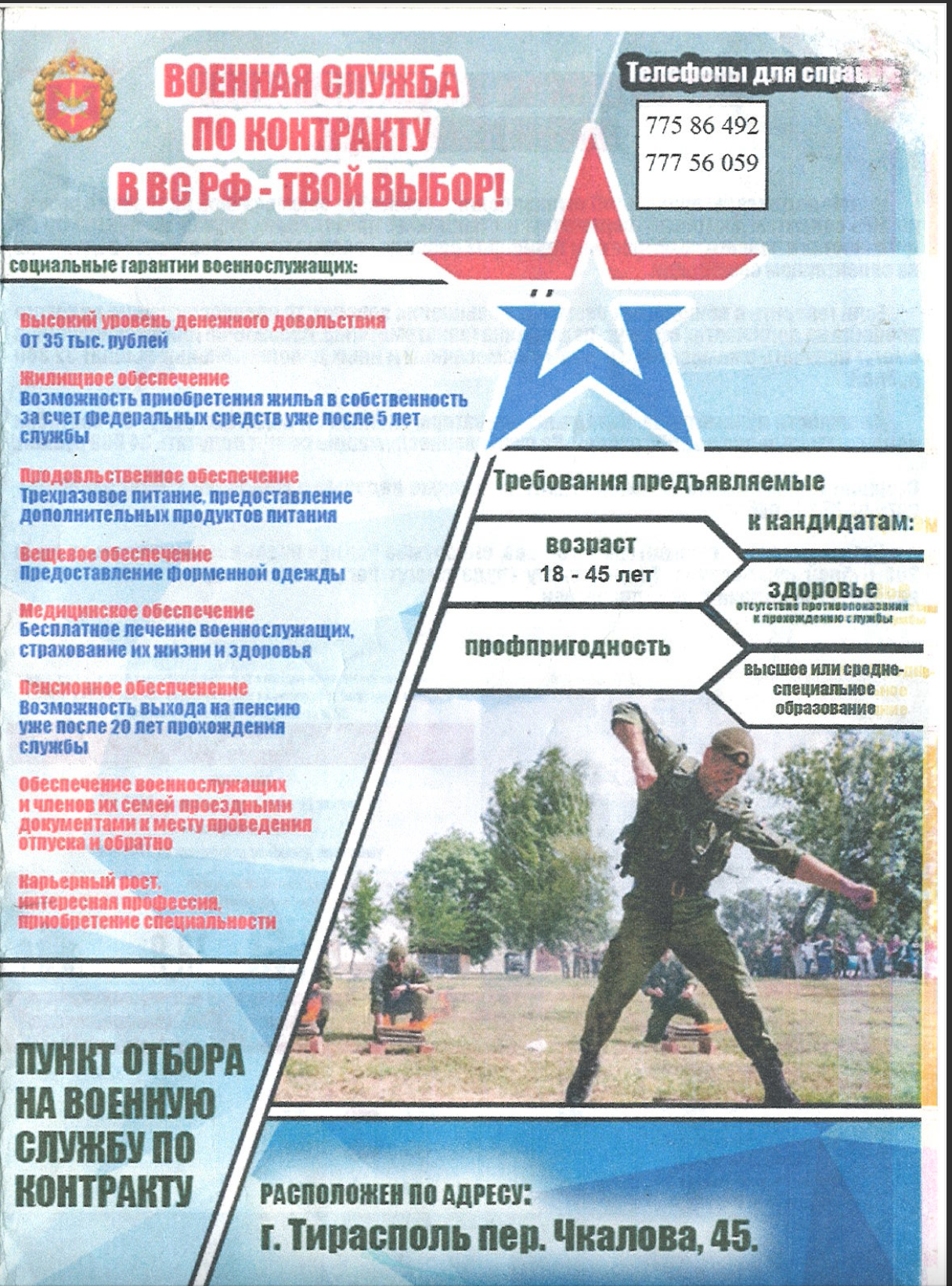 The army promises wages starting from 35,000 Russian rubles (around 600 USD); a home from the government after five years of service; three meals a day and additional food ratios; a vast assortment of clothes; free medical services; free transport shuttle to the workplace; career advancement; and the possibility of retirement after 20 years of service. 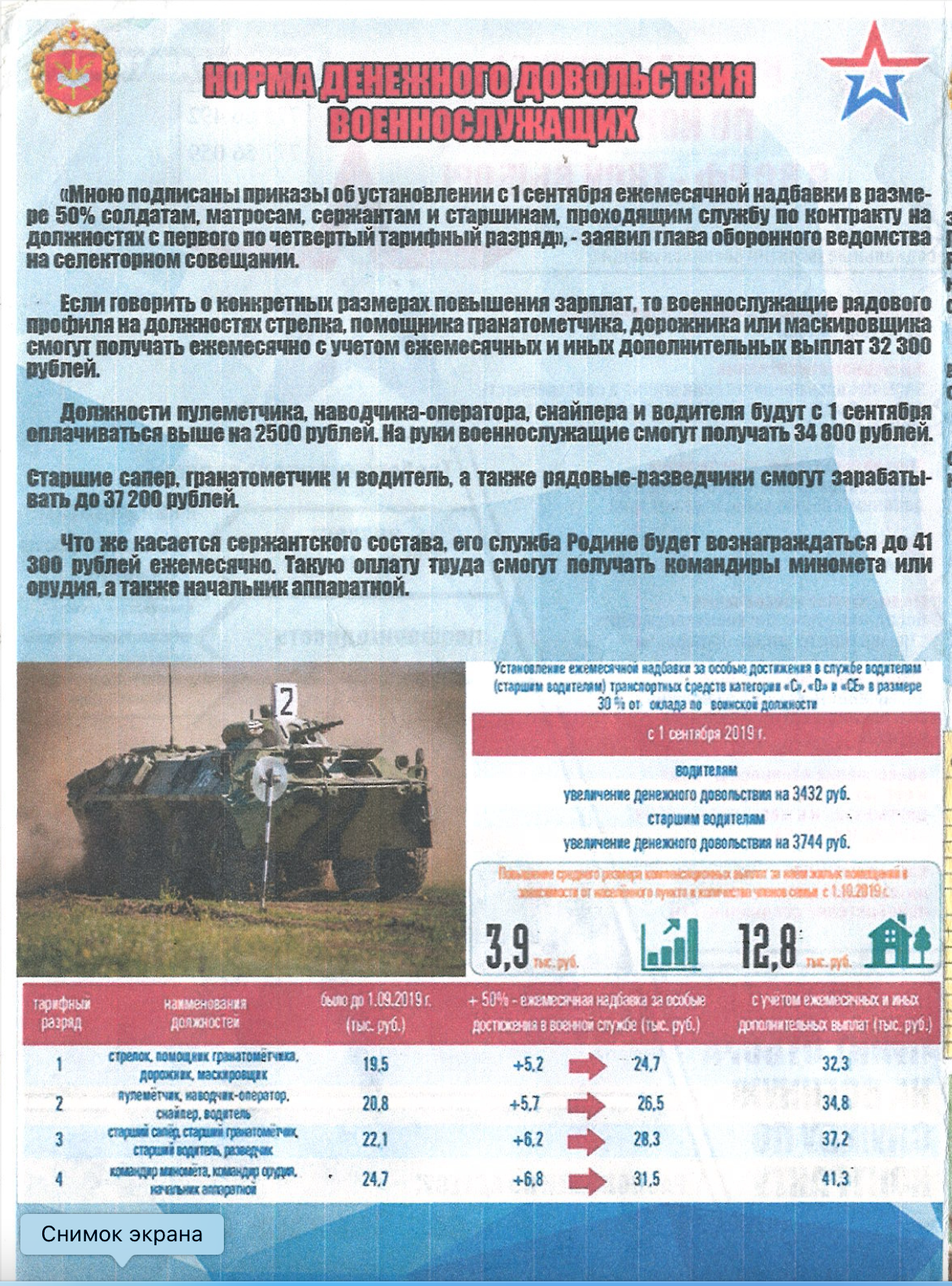 The brochure dates back to 2019, which means the recruitment process has been carried out for years. The promises are backed up with pictures of equipment and food.

Yet, not everyone who has signed up for Russian military service enjoys the benefits according to descriptions in official booklets. RISE Moldova has identified a family friend of a Transnistrian man who has enrolled in the Russian military. 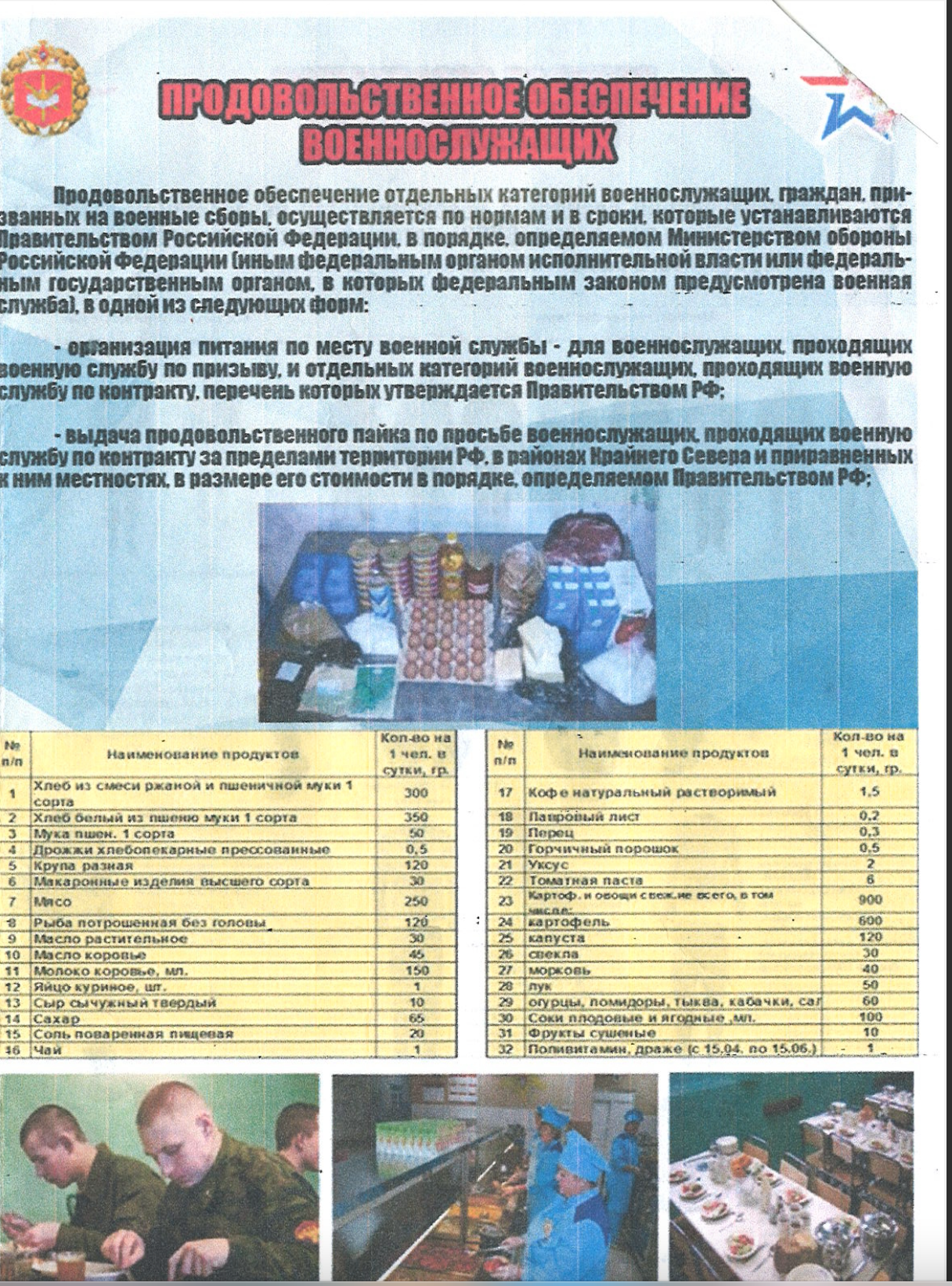 For security reasons, who accepted to talk to RISE Moldova under the condition of anonymity. He recalls that since February 2022 some servicemen have been stationed in fortified venues rather than in barracks and used to visit their families once a month, for a day or two. 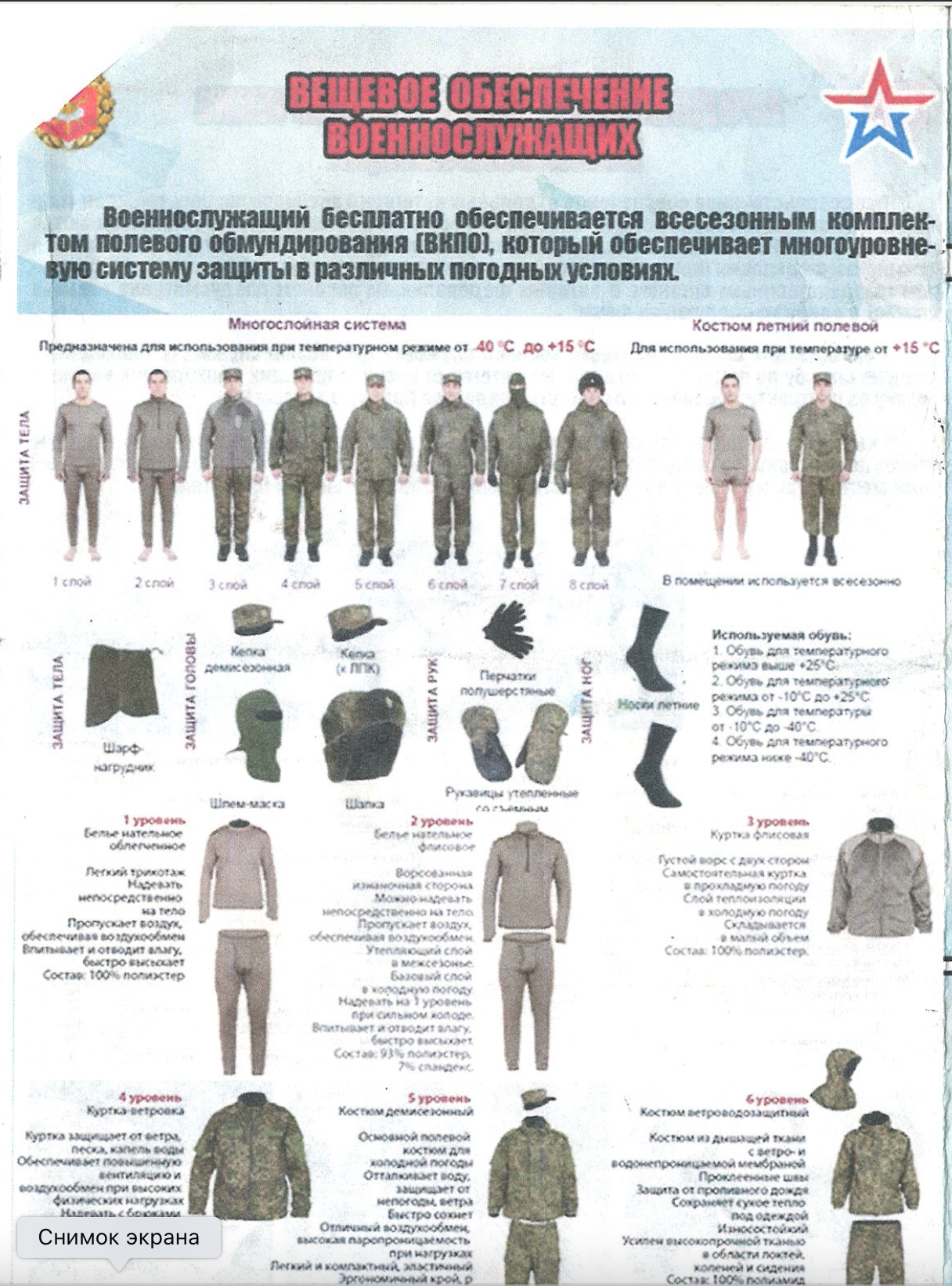 “Relatives travel regularly to those venues to leave them food supply (such as canned food for example), hygienic items, or medicines. In March 2022, I personally brought food and other stuff to a Russian military who got commissioned (near a runway in Tiraspol), accompanying a lady who happened to be a close relative to the soldier,” the source said.

“Recruiting new personnel for contract service in the Russian army, the GOTR command promises full coverage for their needs. In reality, our friend’s family is forced to buy the necessary provisions on its own expense,” the reader from Transnistria told RISE Moldova.