Troika Laundromat is the biggest leakage of banking documents. It contains more than 1.3 million transactions involving 233,000 companies and individuals, worth more than 300 billion euros overall. The data represent a compilation of documents from a variety of sources and were obtained by OCCRP and 15min.lt, a Lithuanian portal. The leaked papers have been shared with 23 media partners across the world including the investigative team of RISE Moldova.

The cross-border investigation reveals how billions of US dollars got laundered through opaque companies and banks that shut down after being used in those operations. Russian oligarchs and politicians were among the big beneficiaries. They secretly purchased shares in state companies and luxury estates, paid for the education of their offspring in UK schools and covered health invoices.

The leakage’s name #TroikaLaundromat comes from the Russian investments company Troika Dialog, which is connected to the Russian banker with Armenian roots Ruben Vardanyan. Billions of dollars were drained from Russia onto accounts in the Lithuanian bank UKIO Bankas (Lituania), via Troika Dialog. A part of the money ended up in accounts of companies involved in the Russian Laundromat. 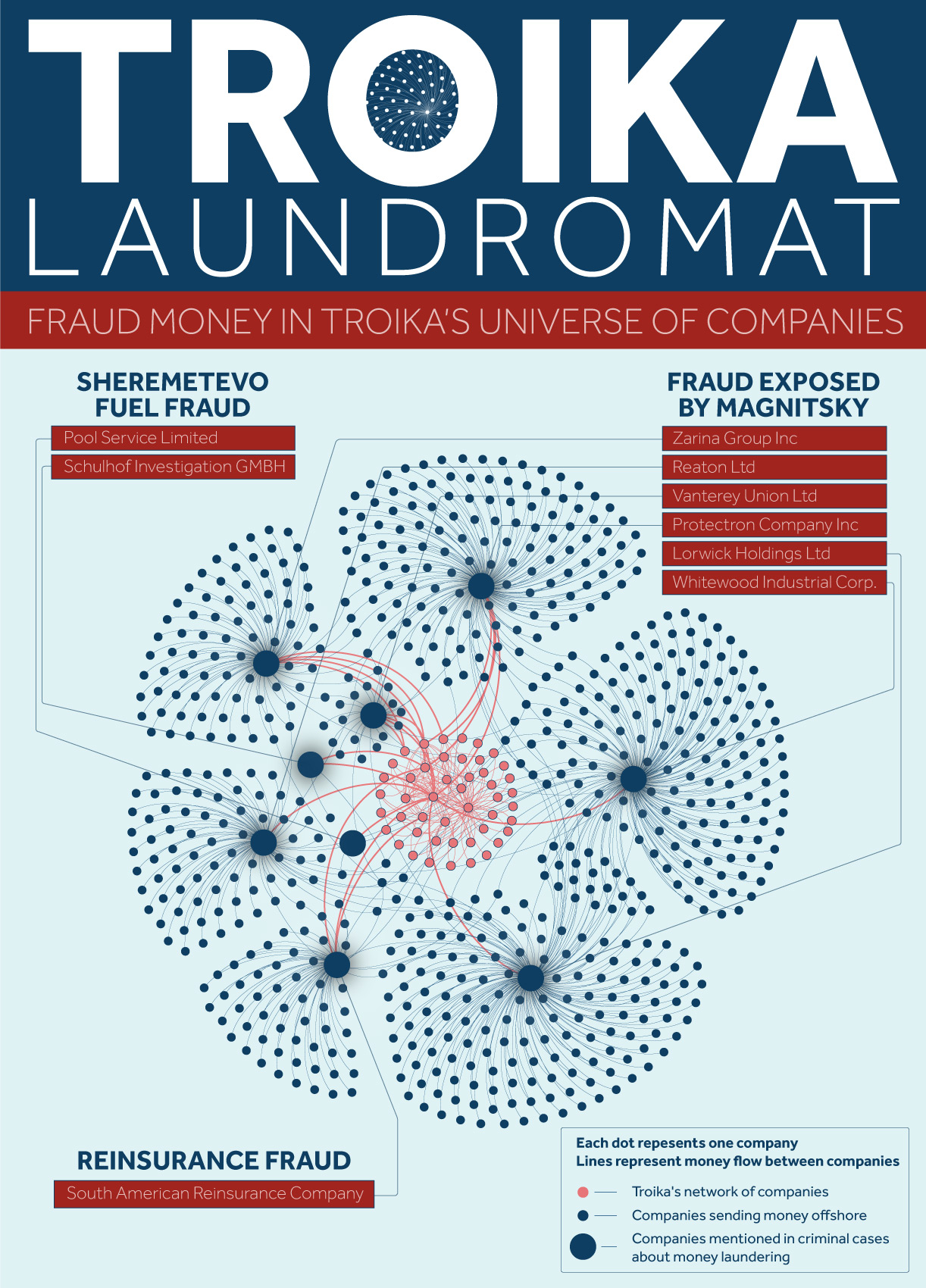 Troika Laundromat has left traces in the Republic of Moldova too.

In one case three companies with residence registration in Chișinău were used in financial engineering to launder more than 100 million dollars. Thanks to fictive contracts that were signed in Moscow and Kiev, the three firms transferred the money from their accounts in the „Banca de Economii” to the Lithuanian accounts of an offshore firm.

The deals happened during the period of multi-billion tax fraud in Russia that later became known as the Magnitsky case, but there’s also a tight connection with a fuel theft scheme at Sheremetyevo Airport in Moscow.

The Magnitsky case became an issue of global meaning following the investigations by Russian lawyer Sergey Magnitsky who in 2007 uncovered the theft of 230 million dollars from the Russian Treasury. He died two years later in a Moscow prison of torture and decayed health conditions. The money disappeared in offshore paradise zones, where the true recipients hide. Before getting there, a part of the money was laundered through Moldovan firms. One of such firms is Bunicon Impex SRL, with its legal address in an abandoned house in the center of the capital and with Transnistrian residents as its owners. 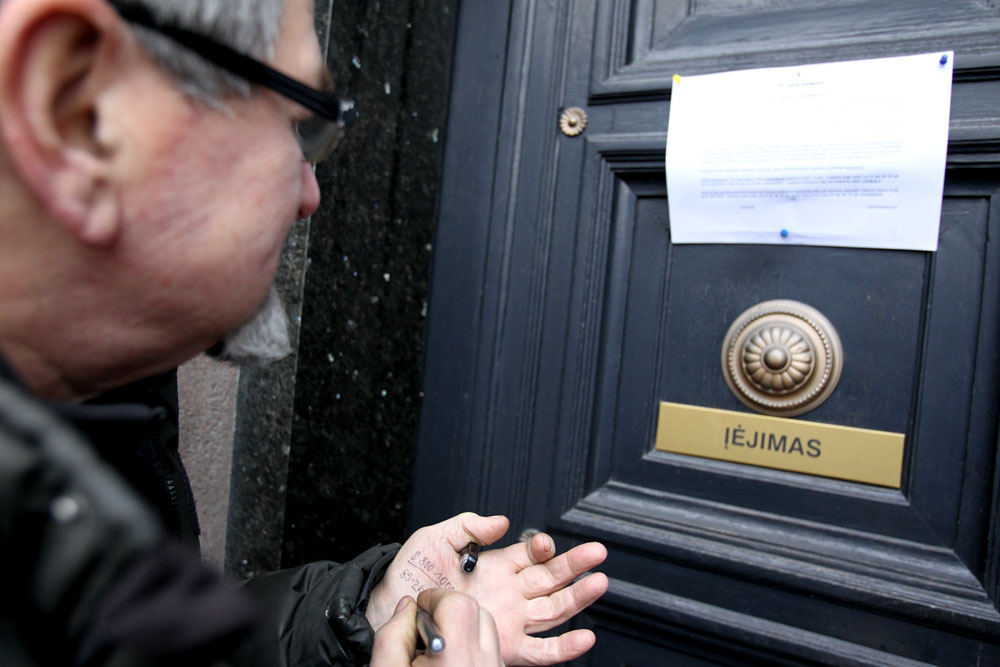 Magnitsky connection
We found nine fictive contracts worth more than 100 million dollars between three Moldovan firms and many offshore firms among the Troika Laundromat records. The deals were done using the same paradigm as in the Magnitsky case. Most contracts look like being signed in Moscow in 2006-2009 and two of them indicate Kiev as the location of signature.

The first contract was concluded on December 28, 2006, and says that Whitmore Limited, a UK-based ghost company planned to deliver equipment worth 25 million dollars to Moldovan firm Avertas-Prim SRL. The latter kept its accounts in the Savings Bank in Chișinău.

It is not clear how could Avertas-Prim SRL sign that contract in late 207 given that it was formally registered only in May 2007.

In 2007 though, Avertas-Prim SRL signed five more contracts worth almost 50 million dollars with offshore firms in Belize, New Zealand, and Santa Lucia. The Moldovan firm was indicated as a buyer in all of those contracts.

Bank records show that Avertas-Prim transferred from its accounts in the Savings Bank millions of dollars onto parasite firms’ accounts in UKIO Bankas. One of those transfers happened on October 19, 2007; Avertas-Prim moved 487,000 dollars to the British firm Damac Limited, which was represented by Olga Semyonova, a Russian national. Four days before this transaction, Damac Limited received a similar payment from Bunicon Impex, which was under investigation in the Magnitsky case.

Offshore at Sheremetyevo Airport
Another Chișinău-based firm that got caught in this money-laundering wave is called Vlacom-Plus SRL. By signing a contract in October 2008, it was committed to move 10 million dollars to Meister Developers LTD, an offshore in Santa Lucia; the latter was involved in a fraud with fuels at the Sheremetyevo International Airport in Moscow, which surfaced in 2008-2010. The scheme used intermediate firms to inflate the price of fuels and passengers were charged to cover the loss, given that fuels accounted for half of a ticket’s price.

Vlacom-Plus picked up its registration certificate in Chișinău in October 2007, by a person who passed away since then. Official records show that in 2008 another Moldovan citizen took over this company. His name is Veaceslav Raețchii, a construction worker at that time who now earns his living by sorting out waste.

RISE Moldova has discussed with Mr. Raețchii. The man recalled how he founded a business ten years ago which he can’t even close today.

– Reporter: Your firm had concluded deals worth millions of dollars with offshore firms. Do you know anything about it?
– Veaceslav Raețchii: I know nothing…
– Reporter: How did you become a founder at Vlacom-Plus?
– Raețchii: A man who introduced himself as Gheorghe proposed me to do business together; he assumed all start-up costs. I followed him, got the registration certificate and the next day he disappeared with the documents and the seal.
– Reporter: Have you ever heard how much money your firm moved around?
– Raețchii: No… I’d like to see him again (Gheorghe) and take back the seal and shut down that firm. I can’t wait get my hand into his throat…
– Reporter: How did you meet him?
– Raețchii: He came along with a girlfriend called Virginia. I used to fetch food packs for her at Rusca (a penitentiary for women). She introduced Gheorghe to me.
– Reporter: Did he promise you money?
– Raețchii: We had an agreement to do business together. But he’s gone.
– Reporter: What kind of business?
– Raețchii: Trading construction materials.
– Reporter: Has anyone called you from the police or the prosecution office?
– Raețchii: No, nobody!

Rudona SRL is the third parasite firm that was used in financial engineerings to launder huge money. This firm was mentioned in two fictive contracts totaling 20 million dollars. Half of this sum moved to Meister Developers LTD, a company caught in the Sheremetyevo scandal. Moldovan official records show that Rudona SRL was founded by Moldovan citizen Anatolie Mura.

Speaking to RISE Moldova, Mr. Mura said he has had no connection with this firm.

– Reporter: You are a founder at Rudona SRL, aren’t you?
– Anatolie Mura: It was closed long ago…
– Reporter: we have documents suggesting that the firm had signed contracts for millions of dollars with offshore entities. What do you know about this?
– Mura: No, no, it wasn’t me… That was a fraud. The police questioned me about it. This firm was founded by persons who used my personal data without my knowledge.
– Reporter: Do you know who is behind this firm?
– Mura: I am really outside this topic. They settled accounts among themselves and nobody has bothered me ever since.

We have asked the anti-corruption agencies whether in 2006 until now any of the companies identified as Rudona SRL, Vlacom-Plus SRL, Avertas-Prim SRL, Tarcon-Prim SRL, Meister Developers LTD, Dalion Trade LTD, Ardo Invest LTD, Alveyston Management Limited, Dekton Properties Ltd, Priamstone INC, Chesterman Capital Corp., as well as the persons who represent these firms have been questioned in any probes regarding money-laundering schemes or suspicious deals. This is what we have received in reply: