A speech edited for Irina Vlah, future governor of the Gagauzian autonomy, in 2015.

Slogans for an anti-Romania rally in Comrat in 2016.

A „blockade” that may erupt into „a new conflict on the Dniester” in 2017.

Monitoring a meeting of Igor Dodon with diaspora residents in Sankt-Petersburg in 2018.

Coordinating a speech which Dodon was due to deliver at the Munich Security Conference in 2019.

All these events boiled in one kitchen: a Moldovan affairs office in the Kremlin. The evidence is contained in the so-called Chernov Archives, which shows that Moscow has been supporting for many years its favorites in Moldova logistically, methodologically, and ideologically. 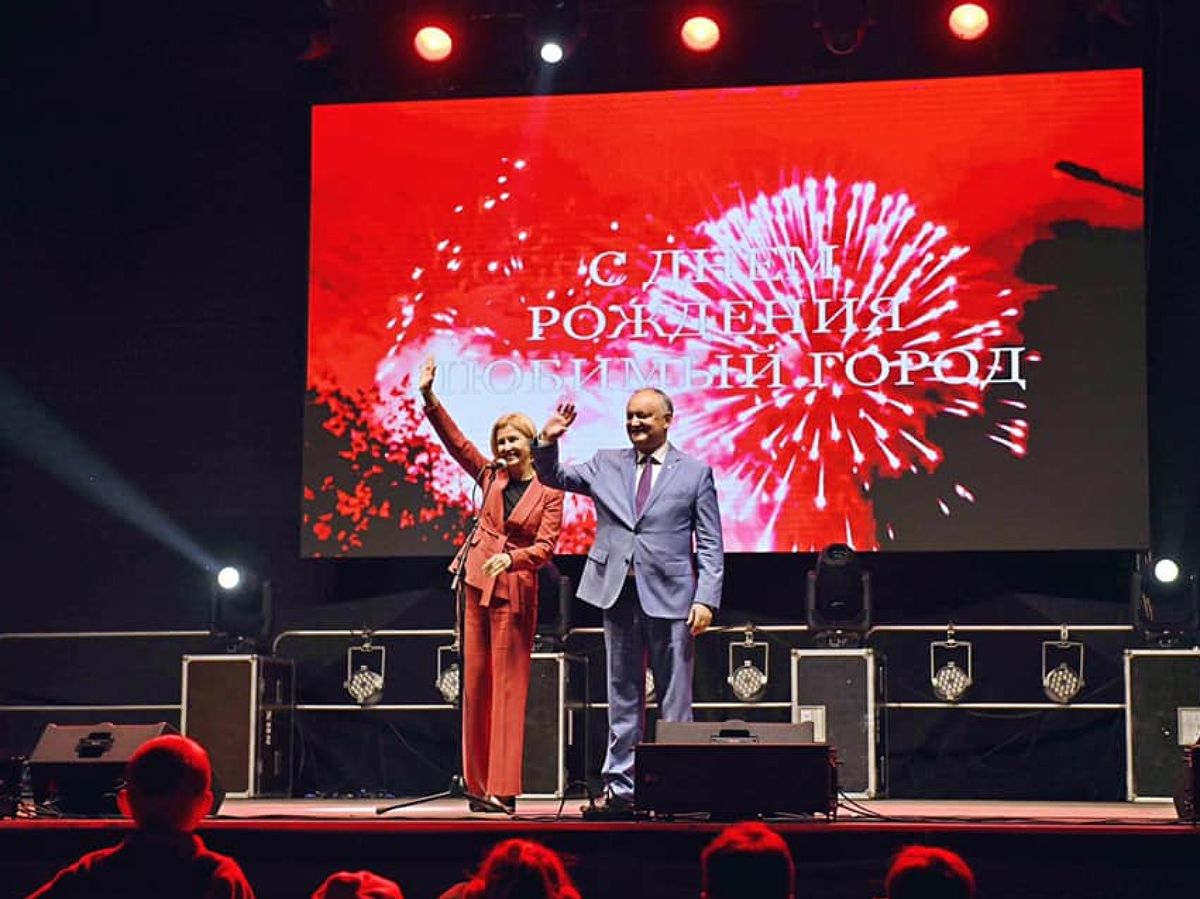 „BUILDING A NETWORK OF NGOs”
After the creation of a Socialist-Democrat government led by Ion Chicu, in late 2019, the Kremlin started talking about the need to expand its soft power in Moldova.

An analytical note from the Chernov Archives underscores that for years Moscow had used just two of its basic instruments of this strategy: RosSotrudnichestvo (RussCooperation) and intelligence operations.

The man who signed that document, Oleg Alpeyev, was a staff member of the Military Academy of the General Staff of the Russian Armed Forces, according to Dossier Center. His expertise and findings, which are meant for the administration of President Vladimir Putin, conclude that “a comparative analysis regarding Russia’s use of soft power in the western ex-Soviet nations shows that the strategy didn’t work well there.”

Mr. Alpeyev also states that “the fall of the oligarchic regime of Vladimir Plahotniuc in 2019 and arrival of a technocratic government led by I.Chicu – which is open for cooperation with Russia – has planted favorable conditions for Russian-Moldovan relationships.”

He went on, “[…] It is important to recognize that getting our soft power promoted must not be limited to a narrow circle of governmental agencies such as RosSotrudnichestvo or intelligence community, but needs to be upgraded to a systemic approach, with the active participation of other ministries (Science, Culture, Defense, etc.), as well as NGOs. Besides, it is imperative to have an NGO network in order to enhance Russia’s soft power policy.”

KREMLIN, GRECEANÎI AND CHIRTOACĂ
The fact that the intelligence services have acted for many years as one of the major pillars of Russia’s soft power policy in Moldova is confirmed clearly by the Chernov Archives. One particular file contains a propaganda paper dating back to June 2015, which was designed to discredit Dorin Chirtoacă, mayor of Chisinau. At that time Moldova was waging a local elections campaign and Chirtoacă was competing against Zinaida Greceanîi, who later would succeed Igor Dodon at the rule of the Socialists Party.

The file also contains two pictures featuring two roads in decayed shape, with explanatory captions. On the left is what Phenom Penh looked like after the Red Khmers’ bloody rule, and one the right din should depict Chisinau under Dorin Chirtoacă’s management. As a matter of fact the right-side picture was taken in Odessa, a Ukrainian city-port; the street’s name is Devolanovsky Spusk. 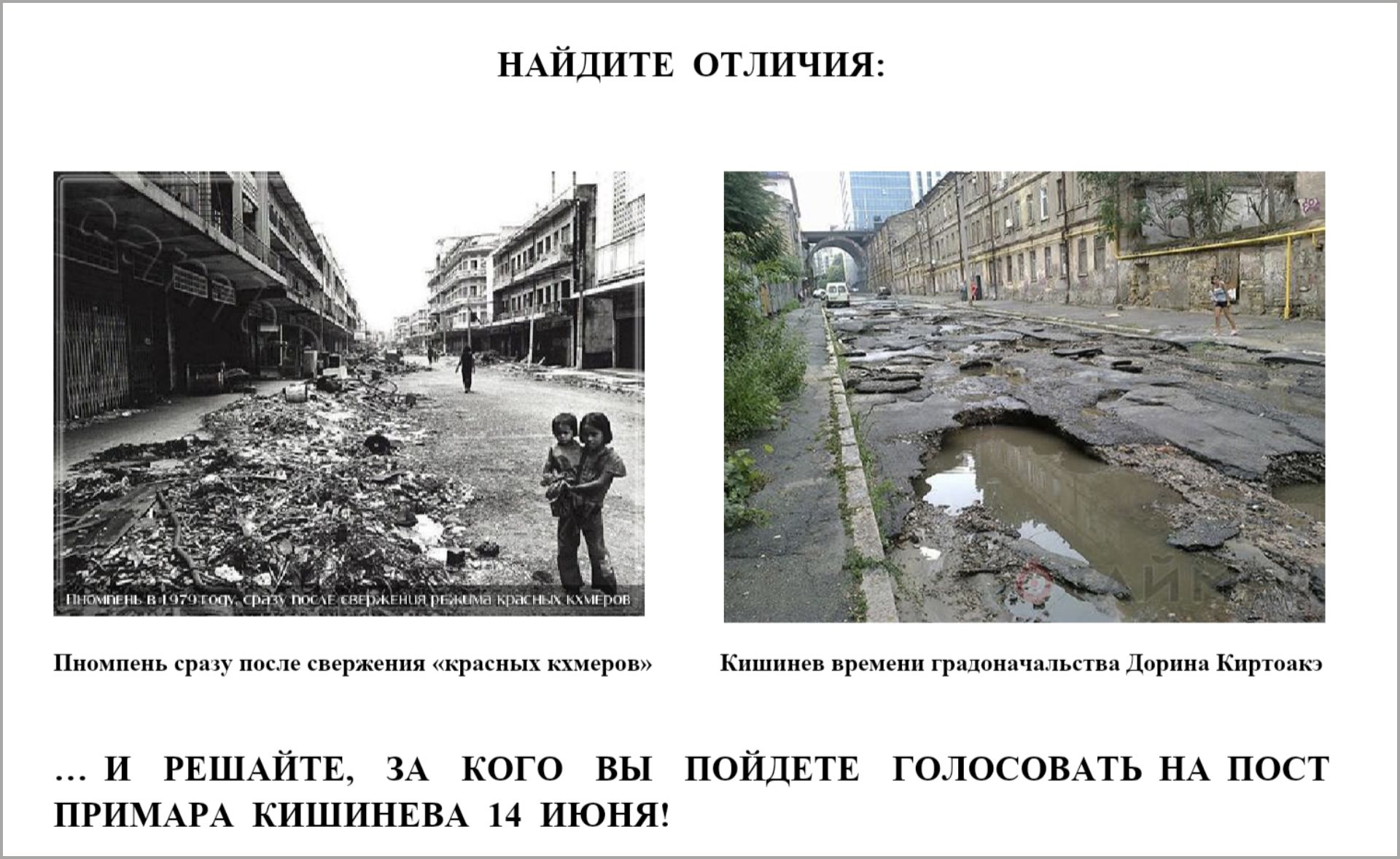 We did not find evidence that this fake was actually used in the 2015 campaign. Mrs. Greceanîi lost to Liberal Chirtoacă in the second round.

INSTRUCTIONS FOR GAGAUZIAN AUTONOMY
The Kremlin’s soft power towards Moldova wasn’t limited to the capital alone. The Russians heavily supported the election of Irina Vlah as the Gagauzian autonomy’s governor, who by law is a member of the central government in Chisinau. This support wasn’t open-hearted as Moscow distrusted Mrs. Vlah.

Irina Vlah, a classified Russian profile reads, „has a contradictory reputation in the Gagauzian autonomy: she is considered a traitor for defecting the Communists Party and – according to sources – is dependent on [Vladimir] Plahotniuc„.

In January 2015 Irina Vlah delivered a speech of almost seven minutes. Apparently, it wasn’t about anything outstanding – a standard speech for a politician making generous promises. But there’s an interesting fact: before getting green light for public reading, it was redacted in the Kremlin’s Moldovan affairs office. The Russians added a few sentences with positive remarks about Russia and critical views of Europe and Romania. Those sentences were marked in red bold.

These are two of the quotes the Kremlin inserted in her speech, which Mrs. Vlah read before voters:
„The situation has worsened due to the Association Agreement with the EU, an enslaving agreement imposed from outside which cut the vital economic ties with Russia, both in the case of our autonomy and of Moldova in general.”

„We call upon all residents of Gagauzia, all patriots of our autonomy, to support our team and voter for a future beside Russia. Gagauzia’s future is being decided today!”

Back then, in 2015, Irina Vlah wasn’t the only Moldovan politician to take instructions about what to say from the Moldovan affairs office. On 10 March, in full electoral campaign in Moldova, Russian lawmaker Vladimir Afonsky spoke to voters in Comrat at a science conference, with President Igor Dodon and candidate Irina Vlah flanking him.

Titled „The prospects of social-economic development of Gagauzia”, Afonsky’s speech too was redacted by the Moldovan affairs office and focused on the same idea which Mrs. Vlah had uttered earlier during her campaign: the economic prosperity of the Gagauzian autonomy depends on the cooperation with Russia directly. Mrs. Vlah’s 2015 campaign relied largely on the pro-Russian rhetoric, which won the post for her in the first round.

MADE IN MOSCOW SLOGANS
Besides the speech editing the same office in the Kremlin used to generate slogans and catching mottoes for public events in Moldova.
„The Gagauzians are the pillar of Moldovan statehood, that is why they condemn the meetings of unionists who seek to destroy the integrity and sovereignty of Moldova, by its assimilation within Romania.”

„Hands off Moldova!”
„Say no to unionism!”
„Rise to defend the constitution!”
These are just a few of the slogans we found in a Chernov Archives file. Titled „Theses and slogans for the 2 April events in Comrat,” this document was meant for a meeting organized by the Gagauzian leadership in 2016 as a response to a unionist march in Chisinau. According to press reports, these anti-Romania messages were uttered indeed at the event, which was attended by the newly-elected Gagauzian governor Irina Vlah and Socialist lawmaker Igor Dodon.

In addition to speech writing to slam Romania, the Moldovan affairs office dealt with the gathering of information about Gagauzian officials, stored copied of identity cards, and other data from informal meetings.

Among the Chernov Archives files we found copies of passports on the name of Ivan Topal, chief of administration of Comrat District; Dmitri Constantinov, ex-chairman of the region’s legislature; Vitali Chiurcciu, head of the Strategic Initiatives Fund and former director of the autonomy’s Department for Foreign Economic Relationships, Services, and Trade, and the former governor Mihail Formuzal.

„MILITARY CONFLICT” ON PAPER
In its routine, the Moldovan affairs office always kept on open eye on the breakaway enclave in eastern Moldova – the so-called Moldovan Transnistrian Republic or Transnistria. When Moldova and Ukraine agreed in July 2017 to erect joint customs checkpoints along the Transnistrian line of the Moldovan-Ukrainian border, Russian media boasted that Chisinau and Kiev were plotting to start a new military conflict on the Dniester.

This campaign was directed from the shadow by the same Moldovan affairs office in the Kremlin, which redacted a statement for the State Duma, lower chamber of the Russian parliament, to highlight what it called “The negative trends in the development of events around Transnistria as a result of the measures taken by the Moldovan and Ukrainian authorities.”

The undated draft was tabled before Duma Speaker Vladimir Volodin and on 7 July the chamber unanimously passed the statement.
Russia labeled the opening of the first joint checkpoint at the Moldovan-Ukrainian border, which Chisinau had not controlled until that time along the Transnistrian line, as a “blockade” that could degenerate into “a new conflict on the Dniester.”

„YOU MAY GO TO PUTIN TOO”
The Kremlin’s Moldovan affairs office was also in charge with the monitoring of Igor Dodon’s journeys in the Russian Federation. For example, in late November 2018 its men reported on a complaint about the hardship in finding a free room for a meeting with Moldovan diaspora in Sankt-Petersburg.

„The location I. Dodon has requested is the Music Hall Theater, which accommodates 1,500-2,000 people. The rent costs 250,000 roubles (65,000 Moldovan lei at that time). The Sankt-Petersburg administration would not pay but would offer the room if I.Dodon assumes the expenditure,” the note reads. However the city found an alternative for free: the hall of the Architecture and Construction University, whose capacity is just 450 seats. We would not tell which option Igor Dodon had chosen but we are certain that he indeed had a meeting with diaspora compatriots on 5 November 2018.

Igor DODON (at the meeting with diaspora in Sankt-Petersburg, Russia): My opponents at home are critical of me. They say Dodon again went to Putin. So you may go to Putin too! Get at least one job done and I shall applaud you…

On 17 January 2017, Igor Dodon embarked on his first official visit in the posture of chief of state. The arrival point was an old and well-known one: the Kremlin. After a meeting with his Russian counterpart Vladimir Putin, the Moldovan leader went along to a press conference about the relationships between the two countries.

„Unfortunately for Moldova, these foreign policy slippages over the past 25 years – in one direction or another, have laid a foundation for those problems we have struggled until today,” he said.

This foreign policy statement, too, was coordinated with the Kremlin’s office for Moldovan affairs, as we learned from the Chernov Archives.

On 12 February 2019 – three days before the start of the Munich Security Conference in Germany – President Dodon passed a pack with files containing his presentation at this event to Oleg Vasnetsov, Russia’s ambassador in Chisinau.

Named the “Self-Comprehensive Package for Moldova”, the materials share Dodon’s vision on the settlement of the Transnistrian conflict and Moldova’s balanced ties with the West and with Russia. The same day the diplomat emails the files to Vladimir Chernov, head of the Department for Inter-Regional Cultural Affairs with Foreigners in the presidential administration of Putin.

„Dear Vladimir Alexandrovich, we send you the materials received […] from the president of the Republic of Moldova, I. N. Dodon, which would be the core of his speech at the Munich Security Conference on 15-16 February, „Vasnetsov explained in his message.

President Dodon shared his vision anyway at the conference in Germany and published it on the official website of the presidential administration several weeks later. The Kremlin’s reaction remains unknown but the Russian Foreign Ministry had cold comments about it.

„On one side there’s nothing bad about politicians’ intentions to settle some issues fast. Everything however depends on whether those intentions were truly connected to reality, not being a mere theoretical message, but rather a concept linked to the history of the problem and genuine possibilities of resolution,” said Foreign Ministry spokeswoman Maria Zakharova at a press briefing.

RISE Moldova officially asked the Moldovan Information and Security Service and the Ministry of Foreign Affairs and European Integration if a national leader or any high ranking official was allowed to pass the content a speech for an international event to a foreign diplomatic representation and what would be the legal term to describe such a behavior. By the time this story went online, we have not received a response from either institution.