A police colonel who has been awarded a Faith to Fatherland Order and a high church medal has left a hole of thousands of lei in the budget of his employer, the Ministry of Interior Affairs.

During one year, the police official submitted fictive reports about his business trips between the capitals of Moldova and Romania, Chișinău and Bucharest. The officer traveled by his employer’s car while in papers for his superiors he indicated airfare.

RISE Moldova studied the lawsuit which his employer filed against him and against a few of his subordinates who stepped on the footprints of their chief till a courtroom. 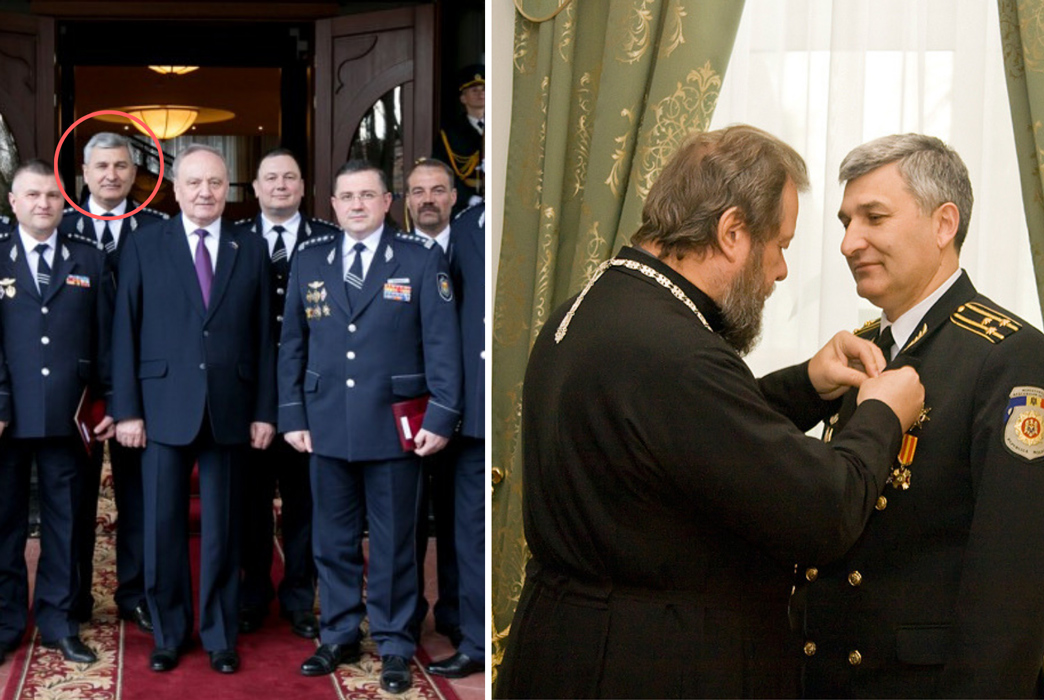 Subordinates described him as an authoritarian person.

He used to slander his subordinates in front of other colleagues, for rubbish. He could give orders that obviously humiliated his subordinates. Men who worked under his command knew his nature and would not enter any debates with Mr. Sofianu. Their relations with the chief should be summarized to ”Understood, Mr. Colonel!” – said in his March 2018 testimony Denis Mihaiescu, head of the Section for Operative Radiocommunications at the Ministry of Interior Affairs.

On the other hand, Mr. Sofianu’s relationships with his superiors were excellent. More exactly with the former interiors minister Dorin Recean who wed his daughter from the posture of godfather.

Dorin Recean, former minister of interior affairs (2012-2015): „Indeed, a while after my appointment [in the Ministry] he became a sort of relative to me. Nevertheless, he [Sofianu] benefited from no promotions during my work there. He went on with the same job, as chief of department. I offered him no personal favors.”

RETIREMENT
In 2012 the colonel received the metal “All-Faithful Prince Stefan the Great and Saint” from Bishop Vladimir (Cantarean), head of the Russia-leaning Moldovan Metropolitan Church, for “contribution to welfare and rise of the Moldovan Orthodox Church.”

In March 2015, President Nicolae Timofti handed in the Faith to Fatherland Order to Mr. Sofianu. Shortly afterwards his career came to an end – the colonel retired from public service amid an internal investigation against him into numerous counts of abuse of office.

In the latest revenue statement which we found on the website of the National Integrity Authority, Mr. Sofianu revealed that he owned a villa, an apartment, and a land plot inside the built-up area.

COLONEL’S RIGHT HAND
Denis Mihaiescu, 39, is the chief of the Section for Operative Radiocommunications at the Ministry of Interior Affairs. As a matter of fact, this section is part of the Information Technology Service, which is known to the general public as the authority issuing criminal records to citizens.

In his latest revenue statement, Mr. Mihaiescu mentioned about himself as co-owner of a one-family residence, and owner of a land plot inside the built-up area and three motor cars.

CASH FROM E.U.
In 2014, Feodosii Sofianu was appointed as the manager of the E.U.-funded project “Cross Border Infrastructure” and Denis Mihaiescu took over the job when his boss left.

Acquisitions were part of the projects and featured among others consultancy and training in Moldova and Romania, special equipment and car maintenance such as diesel and tire procurements and insurance.

FICTIVE TRIPS BETWEEN CHIȘINĂU AND BUCHAREST
In official reports, Mr. Sofianu and Mr. Mihaiescu traveled 19 times to Bucharest during the period covered from February 2014 till March 2015. Their trips were covered by the project „Cross Border Infrastructure”.

According to prosecutors, Mr. Sofianu submitted fictive reports to the accounting unit of the Ministry of Interior Affairs, including electronic airfare tickets and payment confirmation receipts that were never purchased or used.
How did the two act? They used to make online bookings for round-trip flights between Chișinău and Bucharest. In reality, they traveled by their employer’s car or by train; it was only a few times they boarded the plane for Romania. In one case they did not go at all.

As a consequence of this deceiving practice, the damages inflicted to the budget of the Ministry of Interior Affairs amounted to 103,491 lei.

March 19, 2014. Feodosii Sofianu leaves to Bucharest by his employer’s car and returns to Chișinău on March 23, 2014, using the same means of transportation. In his expenses report, he claims to have traveled by plane and asks reimbursements for 5,330 lei.

April 7, 2014. Mr. Sofianu and Mr. Mihaiescu go to Bucharest as BMW passengers and come back two days later by plane. Their expenses report states that both journeys employed airfare services.

May 8, 2014. Mr. Sofianu flies to Bucharest and returns the same day inside a motor vehicle. In both cases, he claims to use a plane to leave and to enter Moldova but his statements are contradicted by the Border Police.

May 14, 2014. Mr. Sofianu again travels to Bucharest by car and again returns to Chișinău inside the same car. He claims to have traveled by air and picks up 5,656 lei from the ministerial accounting unit.

August 28, 2014. Mr. Mihaiescu travels to Bucharest by air and returns by car, indicating that in both cases he used airfare services and pocketing an additional 4,000 lei from the ministerial budget.

September 1, 2014. Mr. Sofianu follows the August 28 scenario of his subordinate.

September 11, 2014. Mr. Mihaiescu and Mr. Sofianu cross the border into Romania by car and return by air the next day. In official papers, they claim that both trips were carried out by airfare.

November 18, 2014. Mr. Sofianu enters and leaves Romania inside a car. Before book-keepers, he asks reimbursements for round-trip airfare: 9,535 de lei.

December 3, 2014. Mr. Mihaiescu follows the November 18 scenario of his boss.

December 22, 2014. Mr. Sofianu uses his employer’s vehicle in Romania, a Ford Kuga, and returns to Moldova with the same car. Yet he pockets an extra 6,815 lei from the Ministry of Interior Affairs for fake airfare ticket prints.

January 28, 2015. Mr. Sofianu and Mr. Mihaiescu leave Moldova by car and return on different days by car. In financial papers they indicate the plane as the solely means of transportation in both directions.

February 10, 2015. Mr. Sofianu and Mr. Mihaiescu go to Romania by their employer’s car and return with the same vehicle the next day. Again they claim to have used airfare services.

February 25, 2015. Mr. Mihaiescu does not leave Moldova and consequently has nowhere to come from. Nevertheless, he files a business trip report and attaches a fake electronic airfare ticket copy for February 25-26 flights; he pockets 6,000 lei from the public budget.

March 4, 2015. Mr. Sofianu travels to Romania with his employer’s vehicle and returns the next day aboard a plane. He counts both journeys as round-trip flights and gets an extra 3,505 lei from the Ministry of Interior Affairs.

Denis Mihaiescu: From my point of view, as I mentioned in my testimonies, the journeys were carried out. I don’t know what was behind them. For me they were legal and accomplished.

FICTIVE TRIPS WITHIN MOLDOVA
The project „Cross Border Infrastructure” also provided for domestic trips for officials from the Moldovan Ministry of Interior Affairs.

Investigation materials show that Colonel Sofianu signed travel orders for seven other subordinates who were expected to travel to various internal destinations but in reality continued to do usual business inside their offices.

The employer paid for those fictive trips more than 50,000 lei.

Anticorruption prosecutors learned that Mr. Sofianu spent the money for personal needs such as various repairs, cash rewards for his subordinates, while a part of money simply disappeared in his pocket.

Sergiu Alexandrov, an officer employed at the Information Technology service, earned 4,500 lei a month in 2015. He told investigators that he several times picked up unmerited cash from the accounting unit for fictive trips that were scheduled in the project „Cross Border Infrastructure”.

“The schedule of this project provided for a number of trips to various destinations inside the country in order to identify the locations where radio communication towers had to be installed. After the installation of those towers, we were required to visit the area and check how the work was done. In the meantime I was part of the taskforce I never participated in any trips although until April 2015 – at orders from Denis Mihailescu – I reported to the accounting unit of the Ministry, where I received cash for domestic trips, 4 or 5 times, 975 lei a month, which I later passed on to Mr. Mihailescu,” reads a fragment from Mr. Alexandrov’s testimony.

Another office in the same Information technology Service, Vitalie Mustafenco, who was also part of the taskforce in charge with the implementation of the project, explained how the cash was collected.

Vitalie Mustafenco (excerpts from his testimonies): “Part of our duties in this project was to travel to various locations in Moldova, to verify how the job is done. I never traveled as assigned, he permanently was in the ministerial office. In August 2014, together with Dmitri Pircovschi, a specialist at the Operative Radiocommunications Section, I entered the ministerial accounting unit and signed… as a confirmation of my business trips, for which I received 975 lei. At the request of Dmitri Pircovschi I passed the money on to the latter in return for the explanation that the money would go to Feodosii Sofianu; I didn’t know why I was instructed to do so.”

PRESS CONFERENCE
On September 21, 2016, the leaderships of the Information Technology Service emerged before journalists and cameras to share the results of the project „Cross Border Infrastructure”. 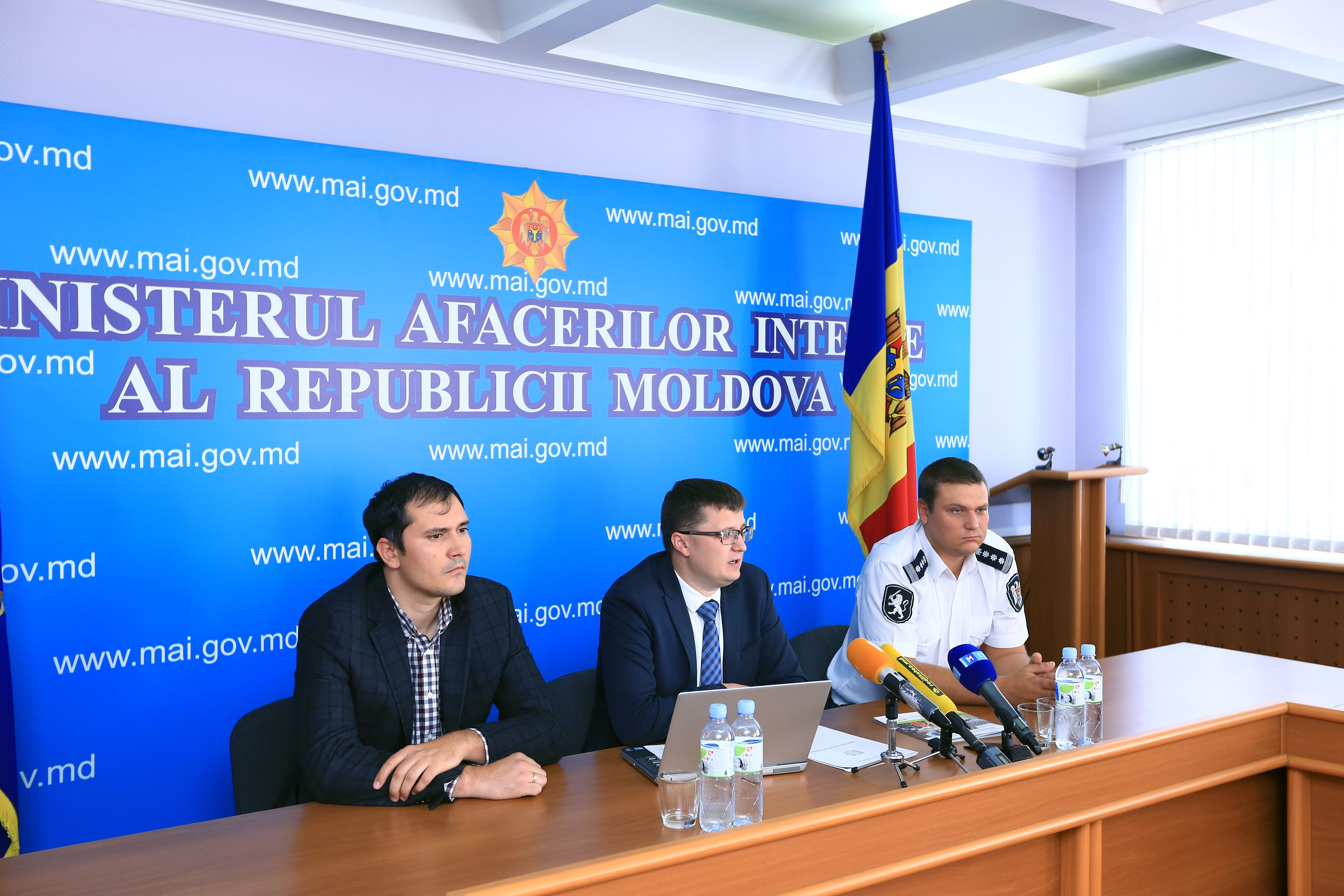 (right) Denis Mihaiescu near the acting chief of the Service, Andrian Șova, at a press conference on September 21, 2016. Credit: mai.gov.md

Denis Mihaiescu, too, participated in this press conference, as the manager of the project. No one yet whispered a word about the fictive trips.

A ministerial official, Alexandru Larionov, mailed us an official letter to our request for information. It says the leadership of the Ministry of Interior Affairs tracked down zero management shortcomings during the implementation of the project „Cross Border Infrastructure” – but admitted that the Financial Inspection “found irregularities regarding the rational handling of funds from external sources, and solved them.”

COLONEL’S DOSSIER
Viorel Morari, head of the Anticorruption Prosecution Office, reckons that the dossier on the name of Feodosii Sofianu was filed on July 7, 2015.

“The reason to launch a probe into the Sofianu case was a report from the Internal Protection and Anticorruption Service of the Ministry of Interior Affairs related to the abusive use of funds by Operative Communications Department officials… that were allocated for their trips as part of the project Cross Border Infrastructure,” Mr. Morari stated.

In April 2018, his office delivered the case to a court of law. Mr. Sofianu was sat in the bench for suspects and Mr. Mihaiescu testified against him as an eyewitness.

Denis Mihaiescu: Indeed I got the status of witness. I did testify and I was warned about hiding information. That’s all.

Before magistrates, Colonel Sofianu confessed and admitted his guilt. He was ordered to pay a fine of just 8,000 lei, to pay back 158,392 lei in stolen money, and to cover the court expenses of 25,200 lei.

In July 2018, Mr. Sofianu transferred 158,392 lei to the account of the Ministry of Interior Affairs, as Andrei Chirca, of the Human Resources, confirmed for RISE Moldova.

Dorin Recean, former minister of interior affairs: Once he got a conviction, it means there were reasons for that. I can’t find comments on this subject […]. It’s hard for me because I am not aware of all the details around the subject.

Colonel Sofianu never responded to attempts by RISE Moldova to get in touch. Nor did his lawyer, Petru Munteanu, show much interest for a discussion linked to the Sofianu case: I can’t talk to you over the phone.

Below are the public institutions that have refused to provide complete information upon our requests during the stage of documentation for this story: