A company has set in to become a neighbor to the Moldovan Prime Minister, Pavel Filip.

The company has acquired a large single-family house for which it paid millions of lei.

RISE Moldova has learned that the company’s formal owners are not its true beneficiaries and that it actually belongs to the prime minister’s family.

For years, Mr. Filip’s interests and businesses have been steered by three of his nephews.

RISE Moldova is exposing below how the affairs within the Filip family are run. 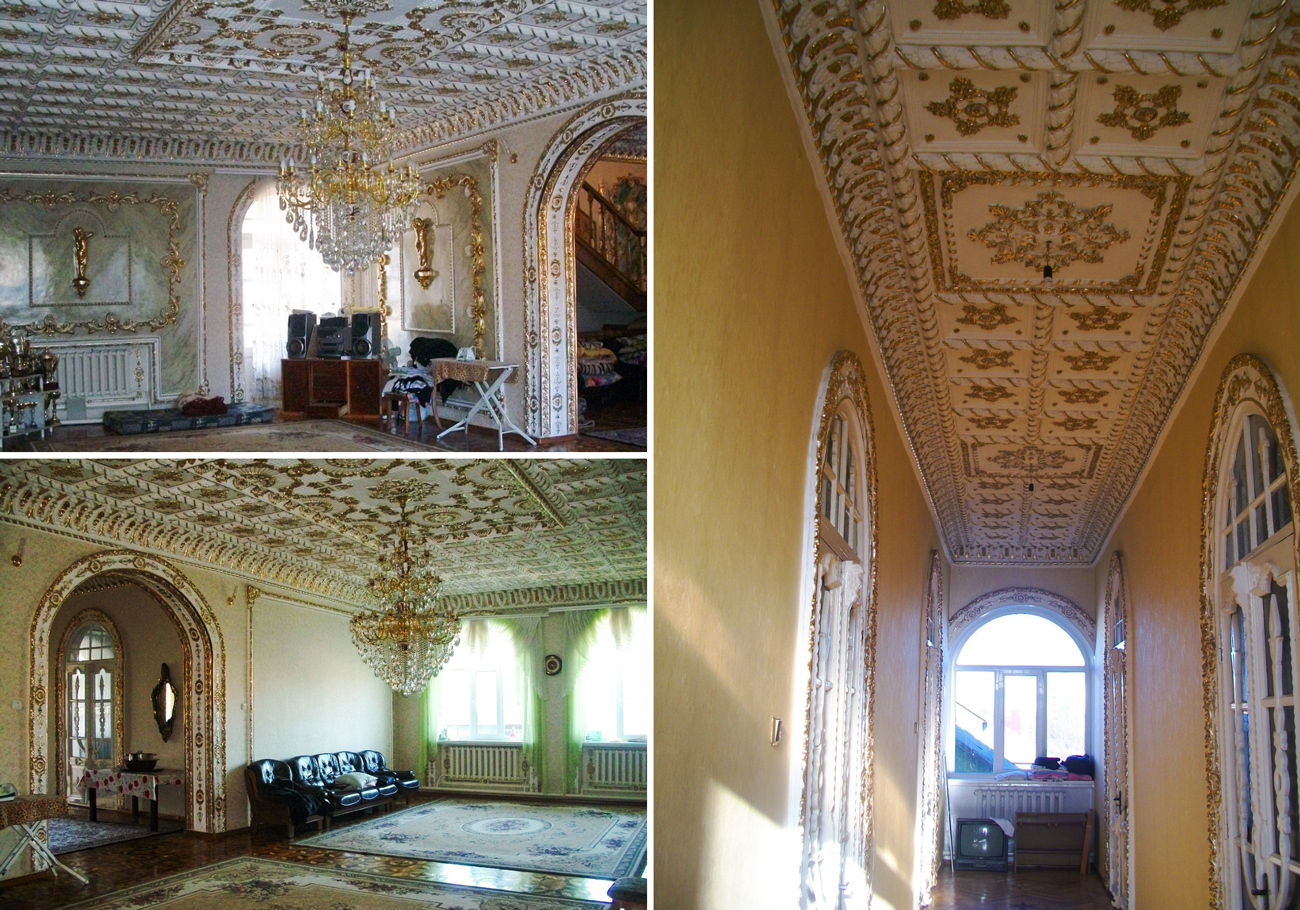 A slide picture showing the ground floor façade of the residence on the Paris Street, which was acquired by a company owned by the family of Prime Minister Pavel Filip. The building is just behind the courtyard of the house where the premier lives.

This sale notice was published on a real estate website on January 11, 2018, the day when the cabinet of ministers convened in its first meeting that year. “[…] We all wish to be successful this year. This year we must work with great intensity and then I am sure that our ambitious reform agenda for 2018 shall be completed,” the premier stated in his opening remarks.

FOUR MONTHS LATER …
Mr. Filip’s to-do list for May 25, 2018, included visits to three cities. Early that day he traveled to Bălți to see two textile enterprises and then to meet the Bălți mayor on the waste disposal issue. From the north, the prime minister traveled down the south and stopped in a village called Drăgușeni, in Strășeni District, which is just 25 kilometers away from his native village. There he gave credits to his government for having completed the repairs of less than one kilometer of local road, as part of the Better Roads for Moldova program. Close to sunset Mr. Filip met farmers at a winery near the city of Ialoveni.

The very same day, in Chișinău, the person who published the sale notice on the day of the cabinet’s first session found a buyer and officially registered the sale transaction.

A „PALACE” IN PARIS STREET
A sumptuous two-storey building erected in 1980, it captures the view with a silver-shining roof made of galvanized steel sheets and several domes. The house’s size is 359 square meters. 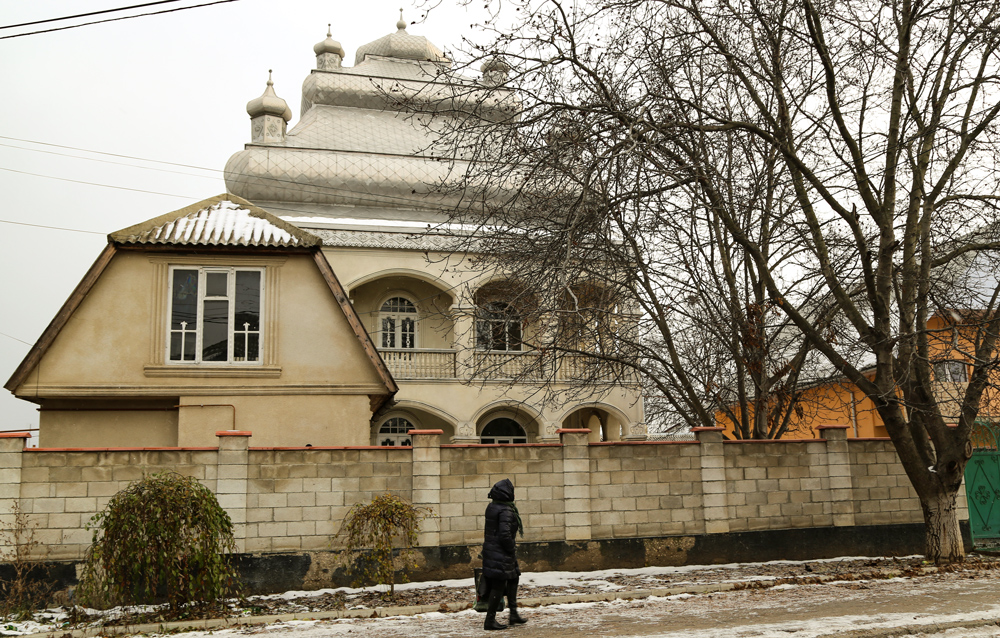 One could distinguish the gilded interior with high chandeliers and walls with plenty of decorations. The wooden doors between the rooms are massive and the door arches are covered with a shining material. The staircase connecting the ground floor and the first floor is made of wood, too. 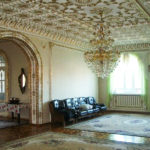 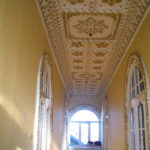 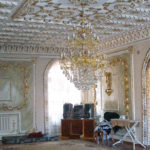 TRANSACTION
The now-former owner advertised the house through real estate agencies. He had asked 200,000 euros for it.

Official records, however, show a lower price the buyer paid. The national cadastral registry suggests that in 2005 the building was evaluated at 2.7 million lei, which is today the equivalent of 137,000 euros – 60,000 euros less than the house owner had expected.

„It’s been already sold. For a bit less [of the price],” we learned from the real estate agent Marcel Popovici.

The seller used to be a neighbor to Prime Minister Pavel Filip. His name is Ivan Drangoi, a man with a record of frequent legal battles with his creditors, among them the natural gas supplier Moldovagaz, a lending company, and an individual. Mr. Drangoi lost all the lawsuits and was ordered to pay back. Bailiffs, who in Moldova are extrajudicial officers executing the court orders and collecting debts, sequestered his properties at the Paris Street: a house, a summer kitchen, and the adjacent land. The sequester was canceled the day when the house was sold.

In 2015 the firm was sold to Burex SRL, a company controlled by Pavel Filip’s two sons, Iulian and Dumitru. They owned together 99% of the company share and 1% belonged to Victor Filip, a nephew of the prime minister. Ever since it acquired the building Vota SRL still keeps its old legal address at 133 Stefan the Great (Ștefan cel Mare) Avenue in Chișinău, with no signs of willing to move into its new acquisition. That address is the host of a shop that is part of the Ciocoville confectionery and sweets retail chain, which is a property of Burex SRL.

BENEFICIARY
RISE Moldova has studied the history of Burex SRL and learned the role of each member of the Filip family and relatives in this transaction.

For years, Burex SRL had been controlled by nephews of Pavel Filip and in 2010 his children took over in an ownership transfer. During that operation, Mr. Filip represented his children via power of attorney and named his wife as Burex’s new administrator. Today a niece of the prime minister runs the firm; she also acts as the book-keeper in other firms controlled by the Filip family.

2003. Iceberg Limited, an offshore near the African coast in the Indian Ocean, takes over the firm. The offshore is represented by lawyer Petru Rusu.

2005, April. Pavel Filip, as director-general (2001-2008) of the joint stock company Bucuria SA, then Moldova’s largest confectionery and sweets maker, offers office room to Burex SRL in a Bucuria building. On behalf of Burex, the agreement was signed by then manager Veaceslav Majeru, a man involved in several financial engineerings.

Closest in front is nephew Eugeniu Monul, then Prime Minister Pavel Filip, and Victor Filip, another nephew, is at the left side.

2005, July. Burex issues a power of attorney to Elena Filip, Pavel Filip’s sister who was working as a book-keeper, to represent the company in any public institutions. With that power, Elena Filip asked the State Registration Chamber to issue a Burex registration abstract.

2007, February. Eleonora Sîrețanu, a niece of Pavel Filip, is appointed as administrator of Burex SRL. In the inner circle of the Filip family, she is called „Aliona”.

2010, September. Pavel Filip’s sons Dumitru (19 years old) and Iulian (21 years old) become majority stakeholders in Burex SRL, 49.5% each. Victor Filip, the second above-mentioned nephew of the prime minister, is appointed as the firm administrator, with a 1% share that he still keeps up to date.

During that period Pavel Filip was acting as the director-general (2008-2011) of Tutun-CTC SA, Moldova’s largest cigarette manufacturer.

2011, May. Pavel Filip has been working as the minister of information technology and communications for several months; he appoints his wife Tatiana as Burex’s new administrator, acting on behalf of his sons through the power of attorney. 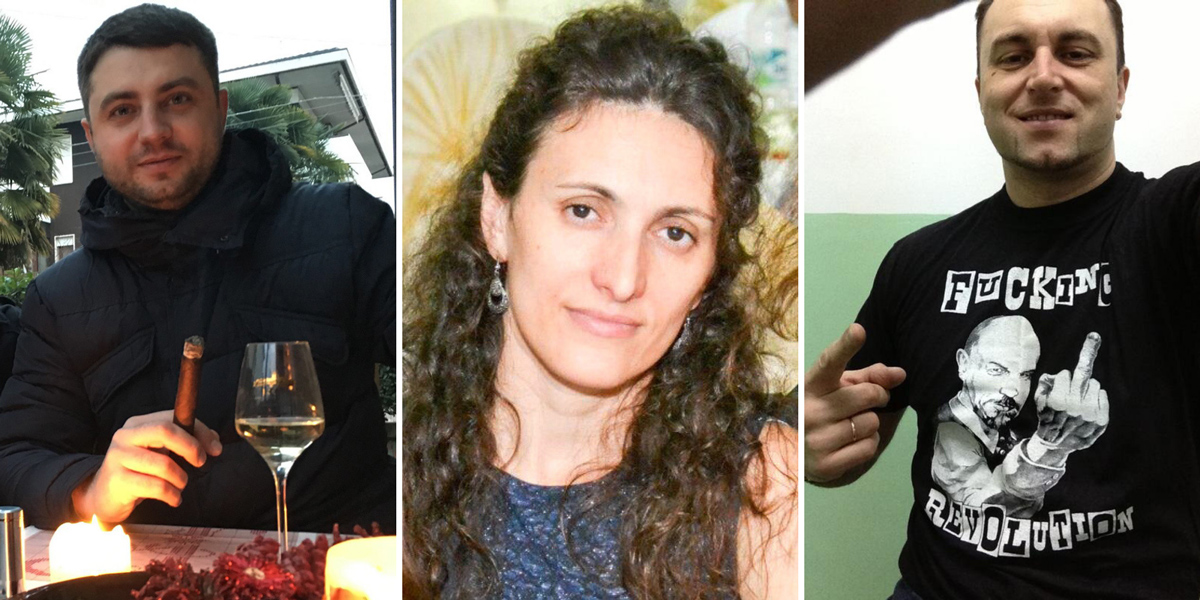 2013, September. Burex SRL takes over a 27-million-leu worth of firm called Interburex SRL which Mrs. Sîrețanu founded in 2008. As a consequence, all of Interburex’s assets in the city of Criuleni – land plots, buildings and warehouses – fall into the pocket of Burex SRL.

NO ONE LIVES THERE
We have spoken to Eleonora Sîrețanu about the transaction involving Vota SRL, which is incorporated within Burex SRL.

Eleonora Sîrețanu, Burex administrator: […] I am not aware about all this information. I need to learn the facts.

On the contrary, one of Pavel Filip’s nephews has confirmed the acquisition.

Reporter: Who lives in the house on Paris Street?
Victor Filip, Vota administrator: Nobody lives there. I’ve not yet decided what to do [with the house].

Reporter: Are you saying it was acquired for no reason?
Victor Filip: There’s always a reason, but why would you care?

Reporter: Vota is owned by Burex.
Victor Filip: When there’s something of commercial concern… we’ll decide then. At present it’s empty and that’s it.

After the discussion with Victor Filip, on November 29, 2018, RISE Moldova reporters visited the site at 23 Paris Street, for an on-spot fact-learning.

The courtyard is deserted. A chair lies upset in the terrace, another one is abandoned in the summer kitchen. There’s a thin snow cover on the stairs but no human footprints. The old green gate is locked and a handful of public utility invoices on the former owner’s name are trapped in the fence.

A neighbor who pulls out a few boxes from a truck says that the house had been populated by ethnic Roma people and that we’d better ask the prime minister who is the new owner now. “Go and ask Pavel Filip” the man suggested.

WHERE THE MONEY COMES FROM IN THE FILIP FAMILY
Over the past six years, the prime minister’s family earned 5.1 million lei. Revenue statements show that more than one million came in the form of wages during Mr. Filip’s employment as prime minister (2016-2018), minister of information technology and communications (2011-2016), and his posture as a member of Parliament (December 2014 – February 2015).

Over the same time his spouse Tatiana earned more than 700,000 lei in wages from Burex SRL, and the rest of more than three million lei came from a rent deal with Burex SRL, and sale of a residence and a motor vehicle.

CURTAIN BETWEEN THE HOMES
In official papers, Prime Minister Pavel Filip owns a sole residence – a 54 square meter one-family home inherited from his parents in his native village of Pănășeşti, which is 30 kilometers north-west from Chișinău. In 2001 Pavel and Tatiana Filip shopped a villa in Chișinău downtown, which is a little bit larger than their home in Pănășești, and sold it in 2014. Starting next year a new house appears in Mr. Filip’s revenue statements – at least three times larger than the one he sold in 2014.

We saw that luxury house on Vasile Pogor Street in the Buiucani District of the capital, a parallel street with Paris Street. Mr. Filip was careful to mention in the revenue statement which has been published by the National Integrity Agency that he was not a legal proprietor of the house and his family rented it on bailment contract conditions. 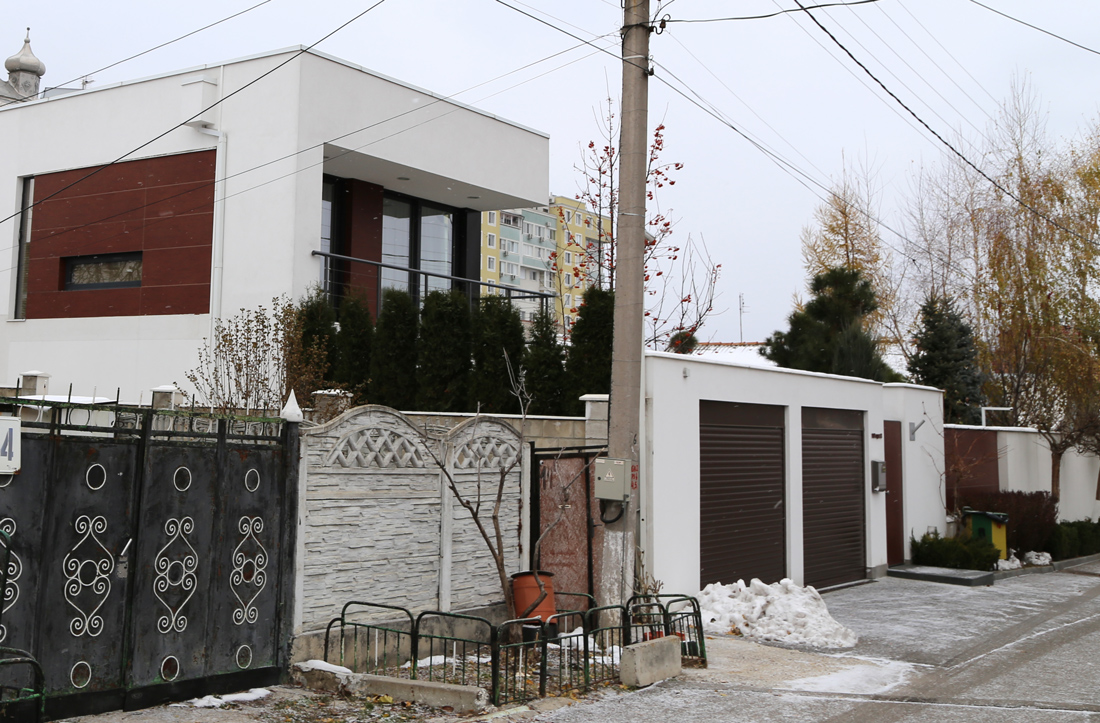 Formalities to be respected, the house is owned by the premier’s younger son Dumitru. He gained the ownership contract at the age of 20 while being a student at a university in the Netherlands. According to cadastral reports, the size of this house is 316 square meters and the sale value was set at 3.4 million lei. Pavel Filip meanwhile registered his personal domicile in Dumitru’s house. This year, therefore, he became a neighbor to Vota SRL, a curtain that separates the two homes that belong to the same man.

WHAT THE PRIME MINISTER SAYS
Reporter: Who is the true owner of the house on Vasile Pogor Street? At this time you live there, don’t you? 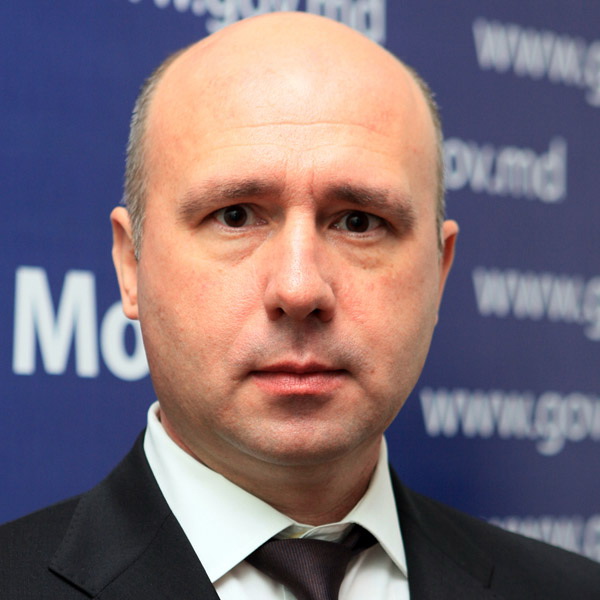 Pavel Filip, prime minister: I have answered this question several times in public and the information you look for is in my revenue statement. Let me remind you that the house was built in 2010, when I wasn’t involved in politics and at that time my wife and I decided that our son Dumitru would own the house. Before he moves in there, we’ll be using it. In order to prevent any misinterpretation, I also mentioned in the same statement that I would live there.

Reporter: Where did the money come from for the construction and purchase of the house on Vasile Pogor Street, given that your son was only 20 at that time?

Pavel Filip: It was built from the savings our family was able to make during many years or work, and thanks to the properties we had inherited from our parents – my wife’s and mine. Then we also had an apartment in the city of Bender [inherited from Tatiana’s parents]. We also sold a three-room apartment in Chișinău and later the house we had lived on Vasile Alecsandri Street in Chișinău.

Reporter: What are your connections with Vota SRL, the firm that is owned by Burex SRL? What is the purpose of the acquisition at 23 Paris Street, which belongs to Vota SRL?

Pavel Filip: My children own Burex SRL and it owns, in turn, Vota SRL. The acquisition is an investment.