Private port at Giurgiulesti for businessmen connected to the Patron gang

Police say the Patron gang is one of the major criminal organizations in Moldova, involved in contract killings, arms trafficking and cigarette smuggling. A group of businessmen connected to the gang wants to set up a private port for cargo ships around the Giurgiulesti port on land of strategic importance, leased from the state. 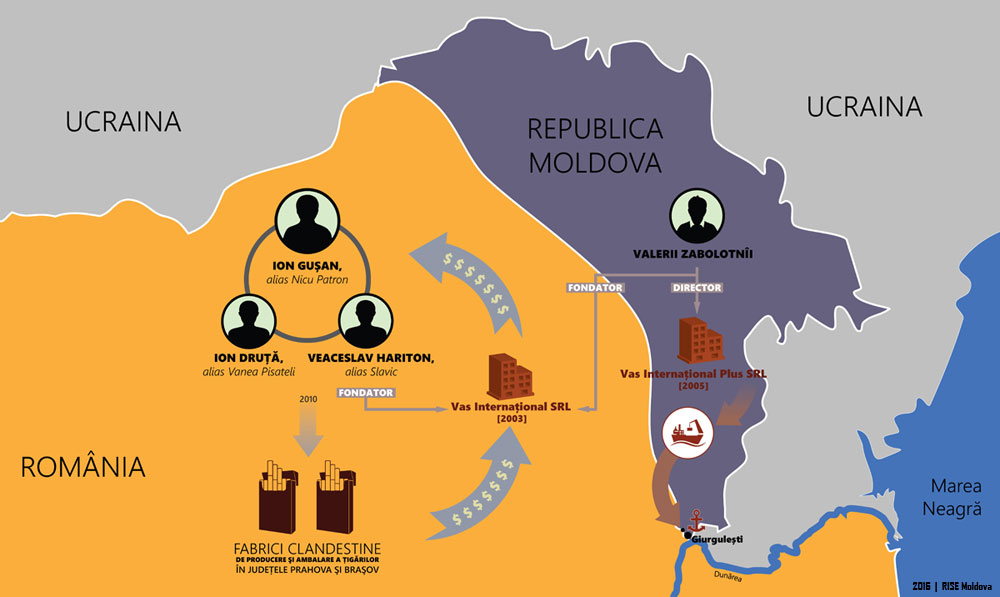 The first steps were taken in November 2010, when the state forestry agency Moldsilva leased a plot of more than 18 hectares near Giurgiulesti Port for 49 years to a company named Vas Plus International. The company is controlled by Valerii Zabolotniy, the former partner in a “twin” company established in Romania – Vas International Ltd. – with Veaceslav “Slavic” Hariton, a lieutenant of Ion Gushan, known in the underworld as “Nicu the Patron,” leader of the Patron gang. Details, HERE and HERE

From tourism to port business
According to the original contract signed with Moldsilva, for a lease fee of 4,000 lei per hectare (US$ 200), Vas Plus International has the right to build a recreation area with gazebos and pavilions on the land near Giurgiulesti. Details, HERE

Giurgiulesti is the southernmost point of landlocked Moldova, and the spot where the Prut River joins the Danube River on the border with Romania and Ukraine. At that spot Moldova has about 480 meters of land along the Danube, which authorities have been trying to develop into a port facility since 1999. An active port on the Danube would be of great value to Moldova, a primarily agricultural country with few venues for export. Currently the Russian Federation has banned the import of Moldovan produce, although talks are underway to lift the ban.

Although the Vas Plus contract was signed more than five years ago, the company has not invested a single penny in developing a recreational area. The land, which supports no trees but only meadows and reed beds, would need major investment to become a tourist destination, according to forestry workers in the surrounding Cahul district. According to them, the riverbank in the area can’t support trees because of frequent overflows of the Prut river. Details, HERE

However, in the summer of 2015 Zabolotniy obtained the authorization to build a private port in apparent violation of Moldsilva regulations. The former head of Moldsilva, Iurie Apostolochi, signed an addendum to the lease agreement on July 29, 2015 that allows “for purposes of recreation and provision of storage, processing, loading and unloading services for various forest, agricultural and other products, as well as setting of a landing stage and a platform.” Details, HERE

Ion Ceban, the current head of Moldsilva, says this is illegal. “This addendum provides additional economic activity, which is contrary to the law because the forest fund allows two types of contracts only: for the purpose of recreation or hunting.”

Just two days after signing the document, Apostolachi resigned. However, the agreement with Zabolotniy remains in force.

RISE reporters tried in vain to contact Apostolachi, who did not answer calls.

‘Twin’ company from Romania – smuggling and money laundering
Zabolotniy has only praise for Apostolachi. In addition, he blames the authorities for the lack of investment and affirms that he plans only a “landing stage” on the river.

“If the state didn’t hinder us, today we would’ve had a recreation area, pavilions and a pool,” he said. “Also, a landing stage. Because we have partners who have millions and would be willing to come up with investment. Only when Apostolachi came to the leadership of Moldsilva, he could understand us, because he is the only professional out there.”

As for Hariton, his former Romanian associate, Zabolotniy says he hasn’t seen him for “two or three” years. He admits, though, that he did receive “offers” to engage in cigarette smuggling.

Hariton was indicted by Romanian prosecutors for organized crime offenses and sentenced in 2014 by the Brasov Court of Appeal to 4 years and 6 months in prison. Investigators showed that the company founded in 2003 by Zabolotniy and Hariton, Vas International Ltd., was involved in money laundering operations from cigarette smuggling.

Said Zabolotniy, “Romania Vas International? Yes, I founded it, then sold it. For [the past] two to three years I no longer communicate with Hariton, only with Grigoras George, who takes care of the company […] I was made some offers related to cigarette smuggling, but I refused.”

Former head of Border Police in the ‘port’ business
Zabolotniy’s statements about his plans near Giurgiulesti Port are contradicted by the documents examined by RISE Moldova, which say that more than just a “landing stage” is planned.

On July 31, 2015, two days after the addendum to the lease with Moldsilva was signed, the State Ecological Inspectorate issued an environmental expertise opinion on the project design. The project provides temporary installation of two concrete platforms, truck scales, administrative rooms, a parking zone, and four anchoring devices. These will be allow docking for ships with a capacity between 400 and 1,200 tons.

Working with Vas Plus International is the company Prut Expo, founded in 2015 and run by Anatolie Radu, the former head of the surrounding Cahul district Border Police and district Liberal Democratic Party councilor from 2011 to 2015. Among the company’s listed activities are wholesale trade in grain, feed and unmanufactured tobacco. Details, HERE

The state also has its „investors”
In the fall of 2015, the government of Moldova moved to rein in activities at Moldsilva and took Vas Plus International to court. The Minister of Environment, Valeriu Munteanu, demanded Moldsilva begin the process of terminating the contract. In addition, he notified the law enforcement agencies. Details, HERE

Munteanu said that in fact a substantial port was being planned, despite Vas Plus calling it just a landing stage. “These things are not done with half measures. It takes a draft impact, an international study, including with the participation of Romania and Ukraine, which must accept by law that a new port is being built in their area of congruence,” he said.

Meanwhile, Iurie Chirinciuc, the Minister of Transport and Road Infrastructure (MTRI), issued a draft Government decision authorizing “the transmission [from] the forest fund of 61 hectares of land located in the unincorporated part of Giurgiulesti village, to the property of the state enterprise Ungheni River Port”. However, one third of this area is leased to Vas Plus International.

On those 61 hectares, MTRI wants to attract investment to expand Giurgiulesti’s port activities.

Said Chirinciuc, “We want to increase our import and export capabilities. Among potential investors are economic operators from Moldova and Romania.”

Chirinciuc’s project is also supported by the Minister of Environment. “Yes, of course I accept the idea and I’ll sign the project. Port activities must belong to the state,” Munteanu said.

The Minister of Transport says that among those interested in investing in Giurgiulesti port is Valeriu Guma, a former Democratic Party member of Parliament sentenced in Romania to 4 years in prison for corruption but cleared by the courts in Moldova.

Guma’s possible interest in the Giurgiulesti Port could be related to the fact that Viorel Pozdirca, the head of Ungheni river port (who is in charge of Giurgiulesti port), is Guma’s wedding godson.

Guma, however, says he is not interested in investing. “I’m not coming, nor was I going to come, in with an investment,” he said. “But if I would have, I could have had even 10 godsons there, it wouldn’t have made a difference. Investments are not made through godsons, but through money and specific projects.”