In Chisinau, judicial robes translate to “cheap apartments.” The bargain is due to the Chișinău City Hall that, despite having been deprived of many plots of land as a result of questionable court judgments, has assigned two parcels worth more than five million lei (US$ 252,000) for the use of the Superior Council of Magistracy (SCM). It appears that 41 judges will nestle in the five blocks under construction; most of them have at least one other dwelling. 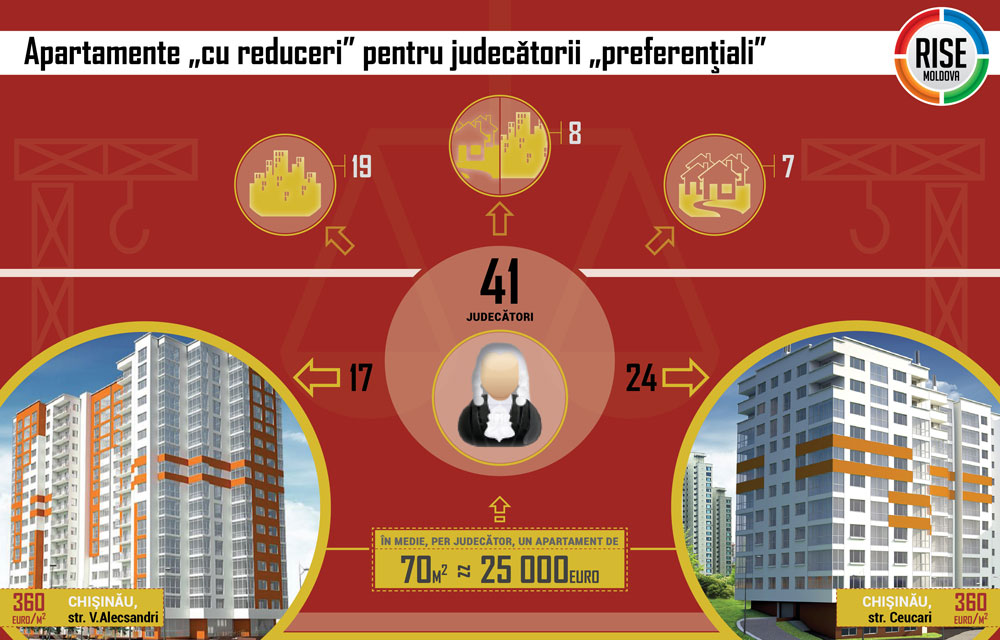 It is interesting that the Chișinău Municipal Council (CMC) is so concerned for the living conditions of judges, given that between 2012 and 2014, the City Hall lost about 6.7 hectares of land as a result of court judgments. This area is equivalent to that of the Public Garden Ștefan cel Mare și Sfânt in Chișinău and, if sold at market prices, would have brought more than 100 million lei (US$ 5 million) to the local budget. According to the study “Transparency in the Municipality of Chișinău” by the Moldovan think tank Expert-Grup: “Two of the parcels were lost because the court required the land to be sold for the construction of two restaurants. The other six parcels, land plots for individual houses, had been taken illegally, the court requiring the CMC to sell the abusively taken land at normative price.”

Priced 40 percent below the market
In March of 2013, the municipal council awarded a plot on Vasile Alecsandri Street in the city’s historic district to the SCM, along with another one on Ceucari Street in the neighboring district of Râșcani, where the construction firm Basconslux SRL is building the five blocks of flats (Details, HERE). The project is to include 133 dwellings, nearly half of which will go to employees of the judicial system including 41 judges. Basconslux is advertising the flats to the general public at about € 43,000, while judges will pay on average about € 25,000. The discount is because the SCM has provided the land.

In August 2013, a SCM commission ruled that discounted apartments can be requested only by judges who work in Chişinău who “do not have a dwelling in the municipality of Chișinău” or “who live in Chişinău but work in other courts in the country.” One month later, the commission extended eligibility to those who “had insufficient living space” or “are not provided living space from their work place.”

Victor Micu, CSM President: There have been many applicants but apartments have not been allocated to all of them. Account was taken of those who have a share in their parents’ apartment but in reality it is not their apartment and if they have their own families, they of course get to benefit. We don’t have judges living on the street, everyone lives somewhere.

Having houses and wishing for an apartment
Judge Ghenadie Pavliuc from the Buiucani District Court is slated to become the owner of a 67- square-meter apartment in the Ceucari Street building. According to cadastral records, the judge already has a two-story house of 72 square meters; the judge’s asset declaration says it is twice that size, at 155 square meters. The house is located in an elite area in Chişinău’s Ciocana district. Judge Pavliuc has also recently acquired a house of 110 square meters in the district of Dondușeni. Details, HERE and HERE

In November 2007, when Judge Caitaz worked at the Supreme Court of Justice, then-President Vladimir Voronin awarded to her the “Civic Merit” medal for “prodigious work in jurisprudence, contributing to the administration of justice and promotion of judicial and legal reforms.”

‘Renting’ in one’s parent’s yard
Judge Oxana Robu from the Chișinău Court of Appeal has “reserved” an apartment of 72 square meters in the Vasile Alecsandri Street building. Although there’s not much in the judge’s asset declaration, Judge Robu lives in a two-story house located in the center of Chișinău on Fierarilor Street. Cadastral data show that the newly constructed building, first occupied in May 2015, has 65 square meters and is owned by her parents, who also own a second 90-square-meter house in the same yard in which they actually live. Details, HERE

Reporters from RISE were unable to contact the judge, but spoke with her mother.

Ecaterina Bumbu, Oxana Robu’s mother: She lives with me, it’s my house. I bought this one [the house in which she lives] but it was damaged and I built another house. The house is new, it’s been built for… it’s not finished yet. I’m her mother and the house is registered in my name.

Judge Stelian Teleucă transferred in 2014 from Botanica District Court to Chișinău Court of Appeal. In 2007, he bought his parents’ 53-square-meter apartment, but a year later ownership reverted to his mother, Valentina. It is unclear why they did this. Details, HERE

Stelian Teleucă: When I requested an apartment I didn’t have living space and therefore I met the conditions for this apartment “offer”. I still do not have living space. I noted in my income declaration that I have also taken a loan of 300,000 lei (US$ 15,000) for a period of 25 years. As to the sources for the payment of the loan installments, I will declare all the information in the asset declaration.

Judges with housing secured by City Hall, in the SCM list
From 1995 to 2009, the Law on the Status of Judges required local authorities to provide free housing to judges. Some of the judges selected by the SCM for the low-priced apartments have already received such free housing from City Hall.

In May 2008, Radu Ţurcanu, deputy chief judge of the Botanica District Court, won a ruling from the Chişinău Court of Appeal requiring the city to provide him housing. Two years later, City Hall assigned him a three-room apartment on Traian Boulevard. In the judges’ block located on Vasile Alecsandri Street, Judge Turcanu will own an 87-square-meter apartment.

Judge Sergiu Daguţa from the Centru District Court of Chișinău acquired an apartment in the same way. As a result of March 2014 decision, the CMC gave him a two-room apartment on P. Zadnipru Street. Daguţa also co-owns an apartment of 42 square meters on M. Costin Street in Chişinău, and in 2016 he will get a 67-square-meter apartment on Ceucari Street.

Apartments ‘with discounts’ for judges with executive titles
While Ţurcanu and Daguţa have each obtained apartments from the City Hall, other colleagues are still waiting for court decisions in similar cases. They include Igor Mânăscurtă and Ina Dutca from the Ciocana District Court; Ecaterina Palanciuc, deputy chief judge of Centru District Court and Mihail Buruian from the Chişinău Court of Appeal. Details, HERE

The judges did not always wait patiently for the courts to rule. In April 2013, nearly a year after the Chişinău Court of Appeal required the CMC to provide housing to Judge Palanciuc, her bailiff Igor Doroftei seized 100 square meters of a house near the Ministry of Labor, Social Protection and Family which is also on Vasile Alecsandri Street. Although the house was under the control of the State Tax Inspectorate and owned by the Republic of Moldova, both the Râşcani District Court and the Chişinău Court of Appeal allowed the seizure to stand for a year.

Elena Ienache, Acting Chief of the Housing Division of the General Housing and Land Organization Division of the CMC: Judges apply seizure when finding a free address based on a judgment they have. In each praetor’s office, there are about three or four thousand persons from the socially vulnerable layers who need improvement of their living conditions. If judges do not find those free spaces before the City Hall, then we provide them to the vulnerable layers.

A request of half a million lei instead of an apartment
Former Judge Mihail Buruian took a different approach, despite being retired. But since he had previously been approved for free housing, he asked that he be given 670,000 lei (US$ 34,000) instead – the price of a three-room apartment. That was turned down but Buruian tried again, asking that instead of a house, he be given a land plot in the historic area of Chișinău. Despite several years of lawsuits, Buruian’s former colleagues ultimately rejected his requests, but he still qualifies for free housing. Details, HERE

Forgetting to declare wife’s companies
Although it looks modest, the house of the Buruian family at I. Iakir Street in the town of Anenii Noi has more than 120 square meters, a detail not mentioned by former Judge Mihail Buruian in his asset declarations. Another thing Buruian forgot to include are the two companies in which his wife Nelli, Head of the Town Family Doctors, appears as founder. Nelli Buruian holds 33 percent of Carfina SRL (2008), a company specializing in the production and sale of meat. She has 70 percent of Buruian Comerț SRL (2011), which trades with sanitation equipment, timber and construction materials; her daughter Alexandrina holds the remaining 30 percent. Details, HERE and HERE

In 2012, Burian Comert was represented to the Ukrainian Customs Service as a Moldovan business that transports goods through the Odesa and Ilyichevsk ports. Details, HERE

Mihail Buruian: Buruian Comerț SRL was opened by my family but its activities have been suspended since about 2011 and it’s not active. Carfina was opened by my son together with some colleagues of his but it is not active either. This business didn’t work out for them and they gave it up right then.

One more land plot, again for judges
At the end of 2014, the CMC allocated a third land plot to the SCM. This one is located on the Mircea cel Bătrân Boulevard in the Chișinău district of Ciocana, has nearly 8,000 square meters, and will be used also for building apartments for judges. Details, HERE

Victor Micu, SCM President: It is supposed to be for those judges who do not work in Chișinău. We have announced to all district court chief judges about this land. We will set up a commission and we will see who deserves and who doesn’t. Even if a judge has been in the system for one year while a court clerk has been working for 10 years in the system then it will be the court clerk who gets to benefit. Everything will be transparent.

Ion Carpov, Head of the General Division for Architecture, Urbanism and Land Relations of the CMC: The motivation (of the SCM) is that whatever is required is done for the system staff and will belong to them […] How many land plots (judges) need, I don’t know, it’s not in my competence. When the request comes to us, we examine it and see what the proposals could be. But whether they need more land, it’s not me who establishes this. They may endlessly request land.