Phytosanitary inspectors issued certificates to export fruit to fake Transnistrian companies authorizing a thousand truckloads of fruit to Belarus. In reality, no fruit from Moldova arrived in stores in Minsk or Moskow. Instead, the documents were used by Lithuanian, Belarusian and Russian businessmen to import fruits from European Union (EU) countries to the Russian Federation. The organized group bypassed in this way the „total prohibition” decreed by the Kremlin in August 2014 for most food products from the EU. The Russian embargo was imposed in response to sanctions against Moscow in the context of the war in Ukraine. 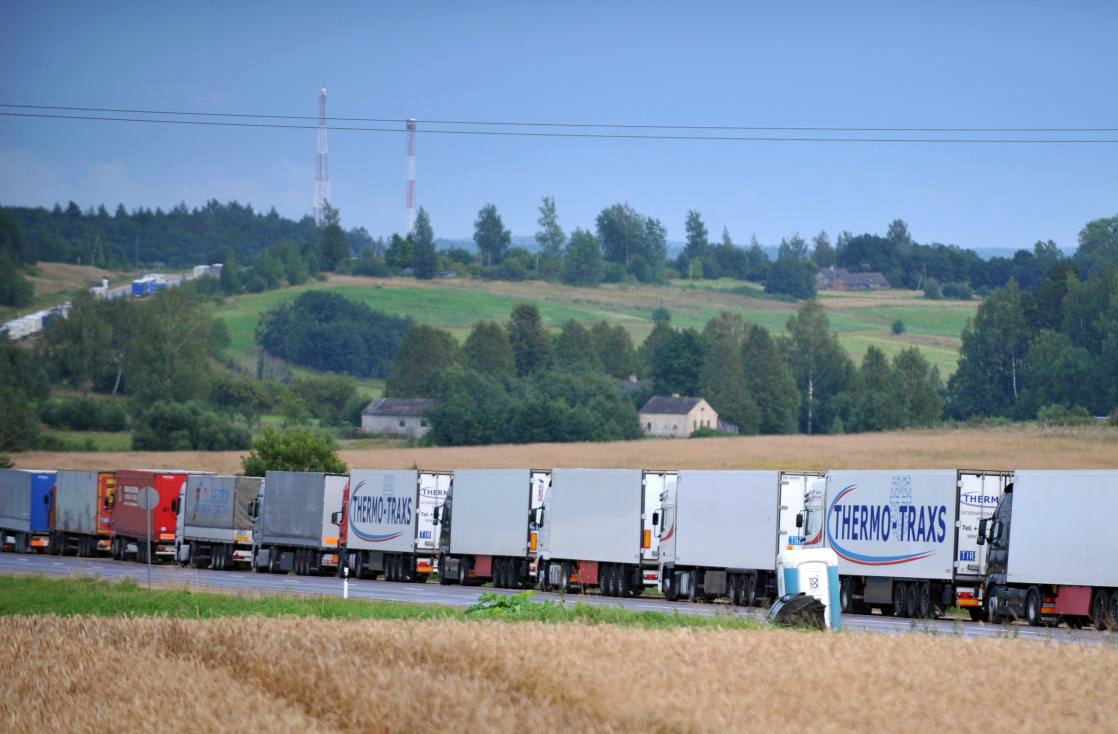 A RISE Moldova reporter posed as a representative of a fictional company from Moldova, Moldstat-Captured Ltd., and contacted Tylenis, claiming to have good relations with the leadership of the National Food Safety Agency (NFSA) and promising that required phytosanitary (food safety) certificates could be obtained for a fee. Tylenis agreed to cooperate.

He asked for the certificates to be sent to an address in Vilnius, the capital of Lithuania, to the premises of the company BT Logistika. Tylenis explained that fruit from other European Union (EU) countries would use the Moldovan certificates of origin to be exported to Belarus.

On Jan. 29, Tylenis sent by e-mail a payment order from Capitalway Ltd. According to the document, Moldstat-Captured Ltd. would sell to the Irish 20 tons (one truckload) of apples for about US$ 1,000, one-tenth of the market price.

Following the e-mail correspondence, two Lithuanian undercover journalists, partnering with RISE Moldova, met Tylenis to discuss details. „For the first week I need 20 certificates, then I can buy 200,” Tylenis told them.

At a second meeting with Tylenis, the Lithuanian journalists took a film crew and asked him why he was attempting to corrupt Moldovan phytosanitary inspectors. He avoided answering and dashed through oncoming traffic to get away from the journalists.

Documents obtained from the Business Registry of Ireland show that Capitalway Ltd. is founded by two offshore companies and the director is Eugenijus Urba, a Lithuanian citizen. Details, HERE

Urba is a partner with Russian citizen Dmitry Egorov at World Trade Baltic in Lithuania (Details, HERE). In his turn, Egorov is the founder of BT Logistika, registered at the postal address where Tylenis asked for the phytosanitary certificates to be mailed. Egorov and Tylenis are also associates in another Latvian company. Details, HERE and HERE

The second contact – Voitans and ‘Vica’
Maris Voitans is a Latvian citizen and the former owner of the Estonian company Kavestron. In January 2016, Rosselkhoznadzor (the Federal Veterinary Sanitary Authority of Russia) criticized Kavestron in the context of dubious export of „Moldovan pears” to Russia.

Undercover reporters for RISE Moldova contacted Voitans with a proposal similar to that made to Tylenis. Voitans explained that he could not use Kavestron in such a manner. „After the suspicious transactions, I was forced to liquidate (Kavestron),” said Voitans. Instead, he referred the reporters to a partner he said would be interested in the deal.

Reporters contacted the partner, a Lithuanian using only the first name, “Vica.” She said she represents the interests of an Estonian company called UniBaltic OU.

On the phone, Vica explains the scheme: „We are sending a payment order. You issue us a phytosanitary certificate. We are sending it to the Belarusians and they confirm the certificate. Afterwards, we pay you when we get the originals,” said Vica.

After this discussion, RISE Moldova received an invoice from UniBaltic OU to buy a truckload of apples at a price of more than US$ 7,000.

On Feb. 19, an incognito journalist in Lithuania met Vica in a cafe in the center of Vilnius, to discuss how to pay for the Moldovan certificates. She said they preferred to pay cash in Minsk or Moscow, US$ 800 for each certificate brokered by Moldstat-Captured Ltd.

NFSA confirms the scheme
Michael Negrescu, head of the unit which controls phytosanitary products and fertilizers at Moldova’s NFSA, says that at the end of December 2015 exporters were complaining about delays in the issuance of phytosanitary certificates.

“I decided to check what the problem was,” Negrescu said. “I discovered that some vehicles specified in some certificates never left Moldova, but entered Belarus loaded with Moldovan fruit. Initially I thought that the exports were made on the basis of fake certificates, but I found copies of these documents in NFSA archives. I realized then it was a scheme involving phytosanitary inspectors and notified the law enforcement officials.”

He said that in January 2016 alone, ANSA employees issued about a thousand phytosanitary certificates for export of agricultural products to Belarus that had been previously “sold” to businessmen from Lithuania and Belarus.

“I do not know the exact number, because certificates issued in December 2015 had been transferred from the NFSA archive to (former phytosanitary chief) Alexandru Ciobanu and disappeared,” said Negrescu.

However, Ciobanu claims that he destroyed no documents. “The certificates are there, just someone is not interested to show them. But I have a number of copies I can present to competent authorities,” he said.

Moldovan-Belarusian correspondence
To confirm the validity of certificates issued by NFSA for Moldovan fruit, Belarusian phytosanitary authorities e-mailed their Moldovan colleagues, attaching scanned copies of the document under which they imported fruit.

Typically, the e-mails were sent to NFSA employee Svetlana Lungu as well as Ciobanu.

Ciobanu said he had little to do with in this process. “I only twice confirmed to Belarusian colleagues the issuance of certificates of Moldova. […] I did not control the process of confirming certificates. […] My colleague just copied me when she was sending messages to Belarus.”

Certificates for ghost companies from Transnistria
RISE Moldova obtained copies of 30 certificates out of approximately 1,000 certificates that were allegedly issued illegally by the NFSA. Seven of the eight companies listed in the documents as “exporters” are registered in Transnistria. According to official data, two of them, Livada Ltd. and Prod Torg Ltd., are fictitious companies. Details, HERE

The eighth company is Silenval Trans Ltd., with an address in Ustia village, Dubasari, in Transnistria. In January 2016, the company was mentioned in a press release of Rosselhosnadzor, which expressed concern that “the State Service for Plant Protection of the Republic of Belarus authenticates enormous quantities of products which neither correspond to the Moldovan characteristics nor varieties.”

RISE Moldova checked the database of the Customs Service of Moldova to see if the eight companies had exported fruit to Belarus under the 30 phytosanitary certificates. There was no record of such exports; this was confirmed by the NFSA. Details, HERE

Cojocari’s signature was listed on the package of documents for the two trucks with nonexistent apples, which RISE journalists were able to retrieve in August 2015.

Another NFSA employee allegedly involved in this scheme is Ciobanu, head of the Unit for plant health and protection. Ciobanu has the status of “accused” in a corruption case filed by NAC in late January 2016. The same case also includes three other NFSA employees as suspects.

Ciobanu denies any wrongdoing. “I am not involved in the scheme. I became suspicious because of the large number of certificates for export of pears. I informed the management about this, but I was told not to get involved.”

Ciobanu sacked, then reinstated
In August 2015, Ciobanu was dismissed as chief phytosanitary officer of Moldova following the investigation of RISE Moldova. But on Sept. 30, he returned to NFSA, but in a new position: chief of the unit for health and protection of plants. Details HERE

„Ciobanu has a technical post. He is responsible for the implementation of European directives and regulations within NFSA and is not in touch with traders,” NFSA deputy director Grigore Porcescu told RISE Moldova in October 2015.

What Lithuanian and Russian authorities are saying
Jonas Miskinis, deputy director of the Customs Department of Lithuania, said that he is aware of the scheme described by RISE: “Our Criminal Department is investigating two cases of forgery of customs documents.”

Alexei Alekseenko, head of Rosselkhoznadzor press service, says that “Moldova is not the only way through which such products reach the Russian market via Belarus”.

Alekseenko said, “We believe that if we have a common market with Belarus, the rules should be uniform. It is very important to us that products of unknown origin do not enter the market. We have identified such products exported under certificates of other countries. The largest part was discovered last year with certificates of Albanian origin. We had to stop import of plant products from Albania. Later, I found that false certificates were printed in Prague.”

Moldovan fruits, frozen in country
The scheme has caused a lot of damage, say producers and exporters of fruit from Moldova.

Said Aliona Mandatii, producer and exporter, “The purchase prices for apples fell by 40 percent. For example, the varieties Idared or Golden, instead of selling for 10 lei, are selling for 7 lei per kilogram, and the price for the Gala variety fell from 10 to 8 lei. In the country, there are about 40 thousand tons of apples, but it is difficult to export them because Moldovan certificates are being used to export fruit from other countries.”